Erika Hurst has created an addiction. In January, we sat up late in Juliet’s apartment with Kyle, talking about the powerlifting meet, watching TED Talks.  It was a great way to unwind after an exhausting day.  Wanting to spice things up, Erika hands me a baggie.  Doesn’t sound shady at all.

Erika had just handed me a bag of cinnamon roll flavored protein powder.  I smelled it.  It was overwhelming, like when you walk into Yankee Candle and start drowning in aromatics.  I was scared.  It wasn’t until the next day that I tried some.

Imagine your favorite cinnamon roll, with extra cinnamon, a drizzle of icing, and perhaps a hint of cake batter.  Now Imagine taking that cinnamon roll and putting it in a blender.

Imagine all of that tasty goodness along with 23 grams of protein per scoop.  If Willy Wonka made protein shakes, this would be it.

This specific protein powder is from a company called TruNutrition, and it’s their TruTein product.  This blend is made up of 40% Whey, 40% Micellar Casein & 20% Egg White, to total 23 grams of protein.  According to the folks at TruNutrition, this blend is formulated because of the differences in absorption rates:

Trutein contains three different forms of protein: whey, micellar casein and egg white. The benefits of supplementing with both micellar casein and egg white alongside whey are their very different rates of absorption. While whey is quickly broken down within an hour, egg proteins are absorbed within 2.5 to 3 hours and micellar caseins are digested over the course of 7 hours (see chart). Taken together, this means that Trutein promotes stabilized total-body amino acid saturation to continually fuel muscle synthesis.

The “big” label information that they list is as follows:

If you’d like to see all of the nutritional and ingredient information, click on this link right HERE.

There are some great things about this protein powder.  Is the blend of proteins important?  Depending on your diet, maybe, but it’s probably not the biggest deal.  Is the extra 75mg of Omega-3 good?  Sure, but I have fish oil caps with 900mg.  The low carbohydrate number (2.5 grams) will be welcomed by almost everyone.  No sarcasm there.

What attracted me the most to this protein powder was the taste.  This stuff is dangerously delicious.  (<- That would make for a good sales slogan.) While I was after the taste, I appreciate the low level of carbs, as well as the protein content.  I should note that I’ve noted the shakes to actually be filling, which I’ll attribute to the blend of protein rather than a 100% whey powder.  If you’re using protein shakes as a meal replacement , the satiating effects of protein should come in handy. 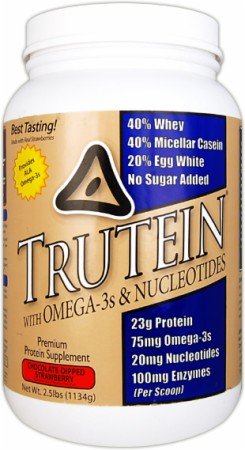 One Reply to “Cinnabun Trutein Review”