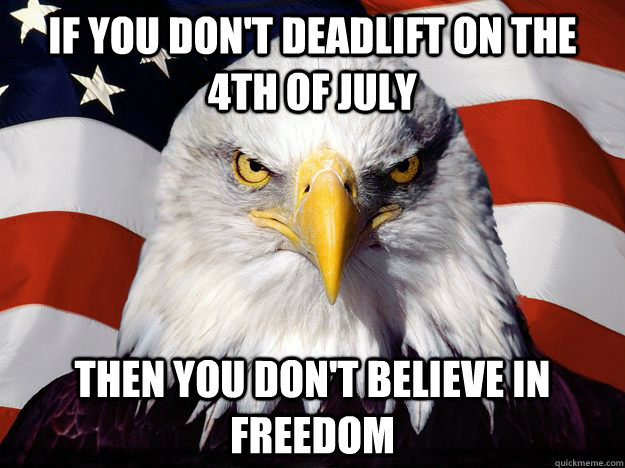 Before we begin, let me thank my friend and Brother, John Feick, for the beautiful title.  Let me also apologize to my international readers who have to deal with the absurd volume of American “pride” for the next 24 hours.  I assure you, if they identified with your country, they’d celebrate your National Day as well.  Wink wink.

Your 6-second history lesson is that the Fourth of July is a federal holiday in the United States commemorating the adoption of the Declaration of Independence on July 4, 1776, declaring independence from the Kingdom of Great Britain. Sorry, your majesty, but you weren’t down to party.  To commemorate this fine event, we celebrate with fireworks, parades, barbecues, carnivals, fairs, picnics, concerts, baseball games, family reunions, and political speeches and ceremonies in addition to various other public and private events celebrating the history, government, and traditions of the United States.Alright, I’m not going to lie, most of that definition is from Wikipedia.  Unfortunately the part that they left out is that In ‘Murica we also celebrate freedom with the deadlift! 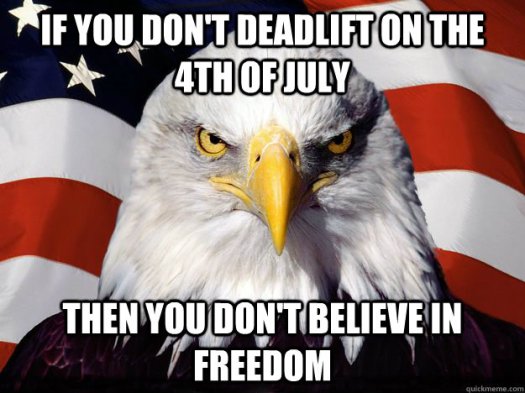 I don’t care what variation it is, and how ‘perfect’ your form is, but you had better damn do it!  You have the freedom to choose, and you can even choose the variation of our very own 3rd President, Thomas Jefferson.  Yup: Today’s fake fact is that Thomas Jefferson invented the Jefferson deadlift.  Tell all of your friends; this is one political/fitness myth that I want to pick up some steam.

TJ didn’t actually have a deadlift named after him, he was a huge proponent of physical activity and exercise.  This one is real: 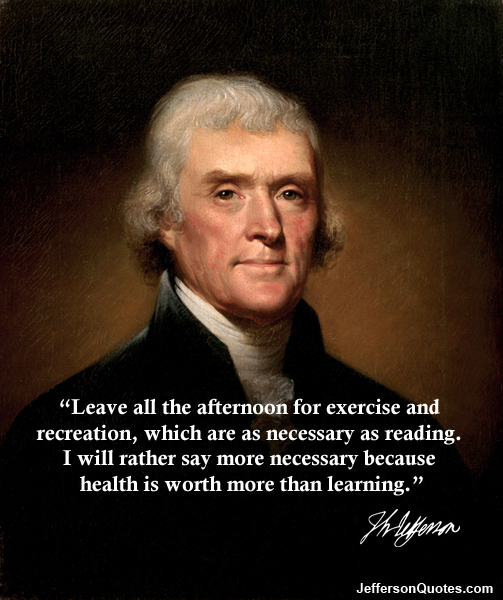 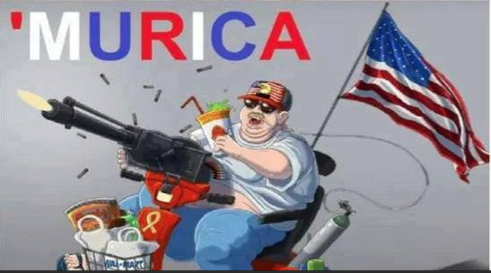 Ah, yes, ‘MURICA, where we have the freedom to eat our way into a scooter or hospital bed, to smoke or drink ourselves onto a transplant list.  We are the freest of frees.

I know what you’re thinking.  “Shirely, you can’t be serious?”  Oh, but I am.  “We’re celebrating a day of freedom from the oppression of British rule, a day that marks American splendor! How can you possibly demean that?!”  Perhaps some Chuckie P will shed light on the matter:

I see all this potential and I see squandering. God damn it, an entire generation pumping gas, waiting tables, slaves with white collars, advertising has us chasing cars and clothes, working jobs we hate so we can buy shit we don’t need. We’re the middle children of the history man, no purpose or place, we have no Great war, no Great depression, our great war is a spiritual war, our great depression is our lives, we’ve been all raised by television to believe that one day we’d all be millionaires and movie gods and rock stars, but we won’t and we’re slowly learning that fact. and we’re very very pissed off.”

If you’re celebrating your beer and your fireworks on this Independence Day, then I think you’re truly missing the point.  If we’re celebrating greatness, which we are, then think about how you define greatness.  Here’s a clip from the HBO series, The Newsroom:

Before we get carried away with our celebratory shenanigans, let’s celebrate what’s important:  The idea that we can cooperatively work for our right to do almost whatever we want.  That’s freedom.  Let’s thank those who work daily to improve this country, in all roles, so that we may live a more comfortable life.  Let’s thank the soldiers and politicians that have lost their lives protecting those rights, and making it their life’s work so they needn’t die in vain.

Before you celebrate your hot dogs and American flag tank top, thank the person that made it possible for you to relax today.  I’m thanking the people who let me look at American under a critical light, rather than blowing smoke up it’s ass.  Why?  Because I think that if “greatness” matters, America has the potential to be the greatest country in the world.

Now that I’ve exercised my right to Freedom of Speech, I’m going to exercise my Freedom to Bear Arms with some deadlifts, chin-ups, squats, and grilled protein. Happy Birthday, America. 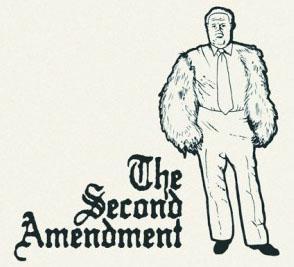 3 Replies to “DYEL: Do You Even Liberty?”

Choose exercises that are easy to do well.
I have no idea what I'm doing in this picture.
The goal isn’t to get good at exercise - the goal is to use exercise to get good at other things.
My mentor and friend @kylemlangworthy often tells me that, "Humans crave ever-increasing levels of complexity."
They say that April showers bring May flowers, but there aren't many flowers where I want to go.
This bike absolutely sucks - and that's why I use it.
Loading Comments...
Comment
×
<span>%d</span> bloggers like this: