I followed a police car from Philly to NYC on Sunday.  Do you know what happens when a cop is driving up the Jersey Turnpike?  Everyone gets out of their way. A clear passing lane is one of my greatest pleasures in life, especially when caravans of minivans like to set their cruise control at the speed limit and sit on the left.  Keep right except to pass; Get out of my way.

Feeling like you’re in someone else’s way is pretty common especially when you’re sharing space with a few hundred other people.  Gym traffic can be as stressful as slow people in the left lane, sitting bumper-to-bumper at the next toll booth. 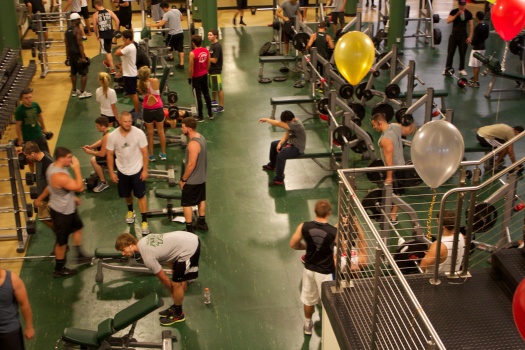 Navigating a crowded gym is a skill in and of itself.  Much like when you’re sharing the road with others, it starts with you.  Here’s my first rule for navigating the weight room:

1) Always assume someone has planned to use what you’re using.

The majority of the time, you won’t be in anyone’s way.. We all operate with a certain degree of autonomy in the gym, and variations in our awareness for who’s doing what around us.  If you’re in a busy weight room, there’s always a chance that someone else has planned on using the same equipment that you’re using.  That’s totally cool!

Curl or deadlift outside of the squat rack, do rear foot elevated split squats away from the bench press gear, and warm-up away from the turf that’s used for sled pushes.  Here’s me and some other guy demonstrating where NOT to warm-up.  Plenty of turf, but we’re in the way of the sleds.  Sorry, guys!

If we all operate with a certain awareness of what’s happening around us, you’ll notice that someone needs to use a specific space or piece of equipment.  If you can do what you’re doing somewhere else; do it somewhere else.

2) Heavy loads have earned the right of way.

Justin looked around for a moment, then asked, “Where should I set up?”  He had a hex bar in his hands, and was ready to deadlift in the Dragon Lair at MFF.  I glanced around the room, realized he would be loading his bar heavier than anyone else in the room and said, “Wherever you want.  You have the right of way.”

When you’re navigating any weight room, yield to the heavier loads.  There are certain exercises that are less portable than others.  If a bar is set up in the squat rack, it’s a safe bet that person can’t squat anywhere else.  It’s relatively easy to move a 32kg kettlebell out of the way of a 405lb deadlift.  It’s also relatively easy to move 20lb dumbbells out of the way of someone doing a Turkish Get Up with 32kgs.  Consider the exercise you’re doing, the load that you’re using, and yield if need be.

Having spent quite some time in commercials gyms, I’m aware that every backwards baseball cap bro on this side of the Bayonne Bridge thinks he’s lifting more than anyone else.  While you’re yielding to the heavy loads, let’s also assume that at any point in time someone else will be lifting heavier than you.

This will ensure that you’re creating space for the exercises that truly require it, while also making sure that you’re not using all of that space just because it’s there.

Sharing really is caring.  This is the golden rule of the weight room.  If you’re steadily moving through your workout, you’d hate to get stuck at one exercise because someone’s shut down to the idea of sharing.  Don’t be that person.

While we can’t ensure that everyone will be as kindhearted as you, we can hope that by paying it forward, we increase our own chances of benefiting in the future.  When you notice someone may be interested in using the same space of set up that you’re using; shoot them a good ol’, “Hey, do you want to work in?” It’s really that simple.

You’ve opened yourself up to sharing, and if it’s important to them, they’ll join you.  If it’s not, I suggest you send them this article while they wait.  Who knows, maybe the two of you could be best friends in no time!

There is an art to getting in and out of the gym without dawdling between sets.  A bit of practice can have any of us navigating a crowded weight room like a pro.  Assume that someone will need to use what you’re using, respect the shared space, and share whenever you can.

These are my best strategies to effectively navigating your weight room.  Let me know how they go for you!

One Reply to “The Best Way To Navigate The Weight Room”