Yesterday was the first day of Summer I, and I had my first of two classes.  During my Health Promotion for Children and Adolescents class, the class went over an essay that was so powerful that I wanted to share it.  When my professor began teaching this course, she had a tattered photocopy, and retyped it herself, finding the source later.  I’ve added pictures some pictures, but the text is all original.  Give it a read, and let me know what you think.

The results of our efforts to promote health and prevent disease are really a measure of how well we are bringing order out of chaos.  In thinking about what prevention entails, it is useful to reflect on one of the most fundamental public health stories involving three people who stood alongside a river on a brisk fall afternoon.  All of a sudden they heard a cry for help from a person, caught in the river’s fast-moving current, trying desperately to stay above water.  One of the people along the riverbank started yelling at the drowning person, “What’s wrong with you, why don’t you know how to swim?”  The second person offered the drowning person discount coupons for swimming lessons.  Fortunately, one of the people on the bank was a public health worker who jumped in the water and pulled the drowning person out.

Over time, more and more people came floating down the river in need of help, and this all created quite a commotion.  This commotion attracted more people.  Researchers showed up and counted how many people made it part of the way or all of the way out of the river and how many fell back in.  They also collected other kinds of information about the risk-taking profiles of the people, family backgrounds, and educational levels.  Survivors returned and started to talk with other survivors and their families.  More community people grew interested and stopped by to cheer everybody on and occasionally castigated the poor swimmers and complained about how much all this c cost.  It got so busy at the river that fast-food restaurants started to appear.  Nutrition advocacy groups came on the scene and started organizing, and there was talk of building a coalition.  It was difficult at the river because more and more people came floating down crying out for help, and it was not possible to pull them all out.  Some floated by despite everyone’s best efforts and were lost.  Furthermore, it was very expensive to keep pulling people out of the river.  Some of them who were pulled out ended up back at the river.  The fact of the matter was people soon realized that pulling people out of the river was necessary but would never be sufficient to reduce the problem.  Too many people kept falling in!

As time moved on more victims, more researchers, more community people, and more public health professionals were hanging around the river.  All these people started sharing their perspectives, and as more different perspectives were discussed, more insight developed.  Finally a critical mass developed and a group of people decided to get together and head upstream to see what was causing so many people to fall out into the river.

Upstream, the group found signs that read, “Go for it,” “Just do it,” and “Come to river country” and that “It doesn’t get any better than this.”  All around were cleverly constructed signs that associated friends, success, sex, self-esteem and the good life with the edge of the river and the rushing water.  As this small group of people looked around a bit more, it found that the children were particularly transfixed with this by all these colorful signs showing sexy men and women, sports stars, sophisticated people, and charismatic role models.  It found few warning signs but generally the barriers to risky behaviors and the messages about caution were overwhelmed by the almost magical inducements promoting swimming in the potentially dangerous waters.

The upstream group decided to try to gain better control of the environment that contributed to so many people falling into the river.  Its goal was to make the environment more conducive to keeping people out of the river.  It was tough, however, and the group met a lot of resistance.  The river marketers said that they were just trying to do their job and that the irresponsible behavior of the people who did not know their own limitations when it comes to swimming should not be allowed to ruin it for everyone else.  The real problem, they argued, was that people were just not responsible enough.  After all, if each person would just be more careful, treat the river with more respect and learn how to avoid the strong current or how to not fall in, there would be no problem.  They argued that it was the responsibility of the family and not the government or industry, to make sure the river was used wisely.  Many community people nodded their heads in response to this argument.  Wasn’t individual responsibility really what it was all about?  Shouldn’t families begin instilling better values and teach their children how to navigate the currents in the river?  Some of the people decided to leave the group and focus more on developing family values and swimming curricula for the local schools.

Others stayed to work upstream.  There was a lot of conflict, but slowly victories were won.  Some defied the law and painted over the billboards that were enticing people into the river.  Others advocated for warning signs and counter-ads to be erected alongside the glamorous pictures.  Still others brought attention to who was erecting the signs in the first place, claiming they must share responsibility for the adverse consequences of their promotions.  The promoters enlisted the government, claiming that the protesters were infringing on their freedom of speech.  The public health workers countered that it is the government’s role to protect those vulnerable to the messages, particularly children.  Legal scholars debated whether commercial speech deserves the same protection as political speech.  The heated battles began to get some media attention.  The geography of prevention began to change as the boundaries of the discussion changed.

A small group of people realized that there was still territory upstream to be explored.  Certainly exploitive marketing practices, misleading advertising and general lack of responsibility of various corporate interests were important, but there were more fundamental issues to be addressed.

This small group headed farther upstream and found conditions allowing huge parts of the population to slide in great masses into the river.  It found high rates of unemployment, racism, lack of education, and economic opportunity, and limited access to health care.  These conditions meant high numbers of children were living in poverty; high rates of infant mortality existed; and a general sense of alienation, hopelessness, and despair prevailed. 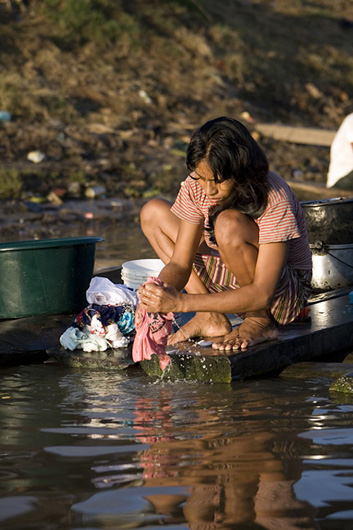 Finally, the group decided that the problem it wanted to address existed across many levels of society.  Individuals, families, communities, and the broader social and economic environment are all important parts of the larger environmental landscape.  The members of the group agreed that they needed to try to work across these different levels, but that unless strategies to address the upstream source of the problems were developed, all other efforts would meet limited success if at all.

Ultimately, poverty, racism, lack of education, and hopelessness are the source of public health problems.  One of the most significant findings in public health research is that the social and economic environment in which people live is the primary determinant of health.  In simple terms, the lever of economic and social resources people have is strongly correlated with their physical well being.  It is this upstream source of problems that ultimately must be remedied.  They key point here is that it is important to begin to link what is observed downstream with upstream conditions.  Doing this requires understanding the upstream-downstream connection and cultivating and using a voice to make these conditions visible and meaningful.

Think about what the essay says, what you think the metaphor means, and how you think it applies to your actions and interactions in your daily life.  Do you find yourself pulling people out of rivers, or do you need to be pulled out of a river?  Upstream, did somebody teach you how to swim, or do you plan on teaching your friends and family to swim?  Should you teach them to swim, or should lifeguards be the primary mean of defense?  Do you know that this isn’t about swimming?  Am I done asking questions?  What is the answer to life? 42.