It’s Monday morning.  It’s the start of a new week, after a relaxing weekend.  You start the morning with a big cup of coffee, and you head to work.  Since you’re smart and you schedule your workouts, you know that you’re heading to the gym after work.  After a protein-packed snack, you arrive at the gym,  warm up, and head over to the bench.

How do I know?

It’s National Bench Press Day!  Across our great nation, and around the world as well, well-intentioned whipper snappers like yourself like to start the week off with the most important exercise ever, the bench press.  Funny thing is, you don’t really take the time to think about why you bench.  Before we discuss, take a moment to think about the role of the bench press in your training.

As I see it, people usually bench for two reasons.  The simplest reason is that people bench to build a bigger bench. The other reason, which is probably more common, is that you bench because you want a bigger/stronger chest.  If you’re benching, it’s for one of these two reasons.  Why do you bench?

If you’re benching for a big bench; you’re on to something.  Our friends studying exercise science will explain the importance of specificity of training, but you can relate it to common logic:  If you want a big bench, you have to bench.  You’re not going to spend all your time jogging if you want to be a sprinter, right?  While raw strength is obviously key, a big bench depends on solid technique.  From set-up to lock-out, benching (and all of the big lifts, for that matter) depends on the ability to replicate the same movement on each rep you take.  Think about what that means.

With technique as the primary factor, what’s going to allow for less variation between each repetition:  Taking multiple medium/high rep to failure in each workout, or working in lower rep ranges that allow for stricter technique.  It’s a no-brainer, isn’t it?  If you’re looking to increase your bench, hitting repetition maximums with shaky technique day after day isn’t going to work.  Eventually you’ll hit a plateau, or your shoulder will wear out before you’re even decent at benching.  Seriously, you think hitting PR’s three times a week is a good idea?

If you’re confused as to the rep range, let’s set some arbitrary constants.  Say you want to take 30 ‘work’ reps in your workout, and let’s say every rep will be completed with 225lbs.  Your common weight room warrior is going to hop on the magical 3 sets of 10 reps, complete their reps, and move on.  10 reps is a pretty long time to maintain perfect, even decent technique, and it’s not going to happen, even for the best benchers in the world.  Let’s break down those 30 reps into more manageable numbers.  You could take 5 sets of 6; that’s a lower rep range, and while each set might not be as difficult, you’re accumulating an equal total volume.  Still, even at 6 reps, your technique is going to get shaky.  Personally, I think that’s the rep cap if you want ‘clean’ reps.  If you’re pressing for more reps, it’s going to get ugly.  6 sets of 5 is slightly better, but if we jump to 10 sets of 3 we’re in business.  Guess what, it’s still 30 reps, but formatted so that each rep is far more similar to the first one.  If you don’t believe me, try a simple experiment.  Videotape your first set and last set of two different workouts.  During one workout, take 3 sets of 10, recording that first and last rep.  During the second workout, record the 1st set of 3, and the 10th set of 3.  They look better, don’t they?  Bingo.

Benching big is about repetition, but not total reps. If your goal is to increase your bench you need to train hard, but you also need to train smart.  Spreading your reps out over a greater number of sets will allow for higher quality control rep to rep, and make for smarter and stronger benching.

Thing is, outside of a small group of athletes and enthusiasts, most people don’t bench for the sole purpose of having a big bench press.  To many, the bench press is just a tool to develop a bigger chest.  The logic is certainly simple:  pack on the plates, pack on the pecs.  Simple, yet flawed.

See, the bench press isn’t really the best exercise for you to use.  It’s not overly taxing for your pecs, and for that matter it’s also not the hardest exercise for shoulders or triceps.  It requires far more upper back and lat use than most people think, and it’s actually a full body exercise.  You shouldn’t just flop down on the bench and hold a barbell over your throat.  It’s not likely that you’re going to drop it, but it is likely that a joint somewhere is going to get hurt.

Considering the difficulty of the exercise due to technique, and the fact that it requires far greater muscle contribution than just the chest, it doesn’t exactly make sense that you’d bench for a bigger chest.  Does it work?  Sure.  Can it be part of your overall training?  Absolutely.  Is it the best exercise for a bigger chest?  Hell no.

Before you get your compression shorts twisted in a bunch, remember why you’re benching.  You want a bigger chest, right?  Since that’s the case, you should be picking exercises that require your pecs to work the hardest.  If you’re looking for a single go-to exercise, it would have to be the dumbbell incline bench press.  The adjustable benches in your gym should have a setting that’s between 33˚-45˚, and that should work just fine.  Benching in this position will allow you to achieve a deeper stretch in the bottom position of the exercise, and the dumbbells will force your pecs to work harder than a barbell will.  If you have the tendency to cut reps short once they get difficult, have somebody watch your set and give cues.  I don’t mean a ‘spotter’ screaming, “It’s all you, bro!”  I mean someone who can call you out on those half reps you’ve been using.

I’m partial to exercises that are structurally respectful and involve the greatest amount of muscle mass per repetition, so this next exercise might come as a surprise to you, but I think that the cable crossover would be a better exercise than the bench press.  There is greater shoulder range of motion than both the barbell bench and the dumbbell incline bench, and your chest has to work harder due to the variation in load vector.  When you’re dumbbell benching, your pecs get to relax a little bit at the top of the movement, but that’s not the case with the cable crossover. 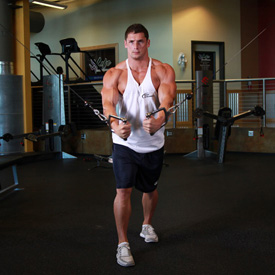 What I like about both the dumbbell incline bench and the cable crossover is the additional range of motion over the bench press, and the increased stability demand, which ups the ante for pec involvement.  Why don’t we apply those ideas to the push-up?

Push-ups are a great exercise, and the odds are that you need to do more push-ups, and less stupid stuff flies, presses, and anything that requires you to lay down on a bench or be seated.  (I suppose the dumbbell incline bench press is an exception.)  Push-ups require a great deal of muscle mass, and you’ll tax your upper back and trunk stability in addition to those pressing muscles.  When it comes to advancing the push-up, there are few things we can do to increase range of motion.  There are hundreds of variations on the exercise, but it’s difficult to go deeper, right?  Not so!  The most applicable option is to elevate your hands using aerobics steps/risers, or even using two benches.  Either option will allow you to lower yourself deeper, allowing you to do more work each rep.  If you’re squeezing your shoulder blades down and together (which you should be doing) you’ll also find it to be a great upper back exercise as well.  For many of you, simply adding range of motion to your push-up is going to reawaken an overlooked exercise.

If you have access to great equipment, than use it to further enhance this bodyweight basic.  Suspension trainers create an element of instability that will dial up the intensity for your pecs and shoulder girdle, and they also allow you to increase the range of motion.  If you’re thinking to yourself about progressive overload, you’ll likely ask about how to make a push-up heavier.  Sure, you can add a plates of a variety of weights to your back to increase the weight a little bit, but we can agree it doesn’t make a push-up that much heavier.  If you want to experiment with backpacks, check out this video of Stevo Reed performing push-ups with a weight-filled backpack.  105 lbs to be exact.  Awesome.

To me, the piece de resistance of using alternatives to benching is the weighted suspended push-up.  You work through a greater range of motion, develop shoulder stability, and develop a tight core and upper back.  Plus, you don’t need a spot:  Just put a foot down!  What’s not to like about it?  When it comes to loading, a partner can place a plate on your back, but that’s less than ideal.  If you can load a backpack with weight, that would certainly be more comfortable.  In a perfect world, you’d have access to weight vests that allow you to strap on some body weight to create more difficult push-ups.  Enter the freakishly strong Ben Bruno, using his weight in vests to complete a set of suspended push-ups.  If you want a benchmark of strength, it may not be the bench press; this is it.  You may be interested in creating an argument regarding the load here.  Fine, let’s get to it.  It’s obviously not a perfect calculation, but I’ve heard that a push-up involves roughly 75% of your body weight.  If you want to figure out the relative load of this exercise, multiply your body weight by .75, then add your body weight (or the external load.)  In the case of Ben’s set, he’s 181lbs (x.75 = 135) plus an external load of 185lbs, which totals 320lbs.  If you saw somebody benching 315 for a set of 9, you’d be impressed, and this set should be even more impressive.  Check it out:

Don’t get me wrong, the bench press is a great exercise.  In fact, I’ve been slowly working on it after taking a few months off from using it.  Focus on technique is going to help build a bigger bench, but if you’re looking to build a bigger chest, the bench press isn’t the answer.  Try out the either push-up variation, the dumbbell incline bench press, or the cable crossover, and let me know how they fit into your program.

It’s Monday morning.  It’s the start of a new week, and you’re ready to go.  When you hit the gym today, do both of us a favor and think about why you bench before you bench.