My cooler rides shotgun each day when I head to school, and today I brought a delcious pumpkin smoothie with me.  I wanted to share the recipe with one of my friends who liked it, and spent 10 minutes searching through old blog posts before realizing I’ve never published it.  I’d hate to let her down, and seeing as I referenced the awesome autumn onslaught of pumpkin flavored products in my last post, I’ve now resolved this issue.

If you’re partaking in the mass consumption of pumpkin this fall, it’s likely because you think it tastes pretty damn good.  I agree, and I’ll admit it’s one of the reasons I like pumpkin so much.  Fortunately, pumpkin (as an actual plant) is pretty damn good for you too.  It’s nutritionally dense, meaning you get loads of vitamins and minerals for a relatively number of calories.  Among other things, you get loads of Vitamin A and dietary fiber, as well as vitamins C and E, potassium, magnesium, and vitamin b5.  A small percentage of you just got really excited about that, but most people just want to taste something delicious.  Here’s where we start: 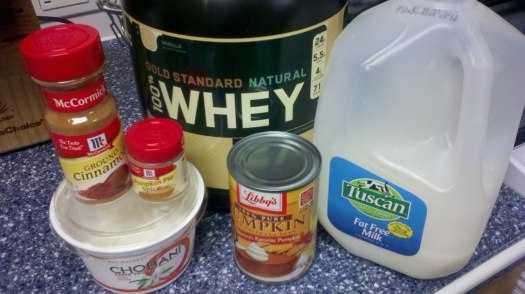 I used an entire 15oz can of pumpkin, but you could use less if you’d like to make a smaller shake.  To be honest, it was easier to use the entire can this morning instead of transferring the unused pumpkin into a different container.  The shake was pretty thick, but you can simply reduce the volume of ingredients if you want a smaller or thinner shake.  The total ingredient list is:

The creation process doesn’t need much explaining, because it’s simple.  You add each ingredient to a blender till they’re all mixed together.  I’d start with the pumpkin and milk, otherwise the mixture is too thick to mix evenly.  If you’re interested in a thinner shake, I’d reduce some of the pumpkin and yogurt, and you’ll be ready to go.  Once you’ve made it and had some, you’re going to look like this: 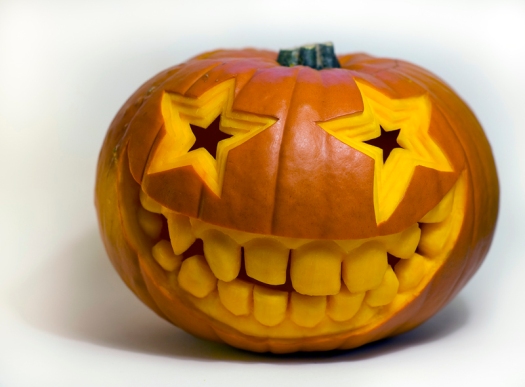 Alright, you won’t actually turn into a pumpkin, but you’re that smoothie packs some serious nutrition in it.  My mom tells me that my nose turned orange when I was younger from eating too many carrots, and I’m wondering if the same thing will happen to me now.  Let’s hope not!  Let me know if you enjoy the recipe, and if you have any pumpkin concoctions of your own!