From a young age, I was an easy scare.  I’d watch certain movies or television shows with the lights on, and those were usually thrillers.  Horror movies?  I couldn’t handle them.  Do you remember being 5 years old, turning off the basement lights and then sprinting up the stairs, thinking that you cold possibly run 1,080 million miles per hour and make it up the stairs before it was dark?  I think I did that through the 4th grade.  Somewhere along the way, I’ve developed an appetite for the alarming, and I can deal with most horror scenes.  My old roommate at the University of Delaware would play the Saw movies and introduced me to Rob Zombie’s genius The Devil’s Rejects.  His efforts have payed off, because the only TV show I watch these days is American Horror Story, and we now get to chat about the happenings each week.

Even though I’ve developed a taste for horror, there are still some things that I just can’t deal with.  The Achilles tendon scene in Hostel?  I limped for about 3 days after that, just because I imagined it happening.

The most recent fear-inducing panic happened just a few hours ago, during my PE practicum today.  As a class of 6th graders filtered in to the gymnasium and attendance was taken, my mentor teach asked me if I wanted to take them through their warm-up.  Easy, peasy.  As the students went through their jumping jacks, mountain climbers, and push-ups, I thought to myself, “Let’s see if they can squat.”  I demonstrated and asked them if they’ve squatted before, the unanimous “Yes!” included tones that said “Mr. Gibbons, we love you!”as well as “Mr. Gibbons, if I could drive I’d run you over with my car.”  It was a harbinger of the horror I was about to witness.  There were a handful of students whose squats would be considered competent, but most of them looked like the picture below.  Even with the cues of ‘feet shoulder width’, ‘butt back’, ‘pull your knees apart’, I witnessed a whole of ‘toe-squatters’, and I think that even my glutes turned off in respect for the rest of the sleepy cheeks in the room.  To sum it up; the squats were scary. 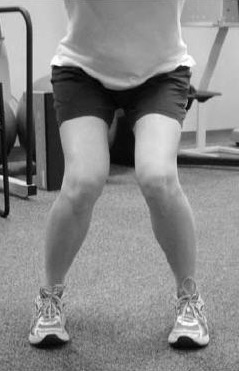 I’ve written about squatting high before, but a refresher is certainly necessary.  I’ll take care of the squatting issues I see in my placement sites and while I’m student teaching, but I want you to think about why and how of squatting.

If you can find footage of you taking your footsteps, you’ll watch yourself fall on your bum a few times; it’s part of the learning process, right?  Well, when you make your way from seated to standing, you’ll squat.  It’s what babies do, so regardless of your ability to squat right now, you did it at one time in your life.  If you’ve done it once, it should be easier to bring it back.  If you check out the toddler in this picture below, you’ll see that he’s got in figured out without ever thinking about the movement: 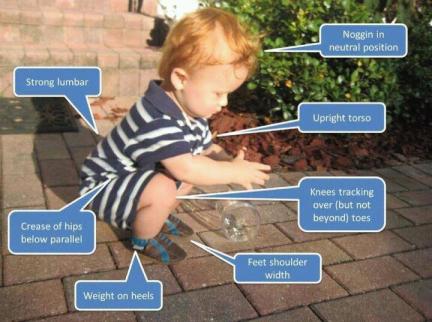 (If you ever have somebody arguing with you that squatting isn’t natural, the babies-squat-on-their-own explanation works every time.  It’s like discussing carbon dating and fossils with people that don’t believe in dinosaurs.)

It’s important to note that there’s a difference between the movement of squatting, and the squat as an exercise.  The ability to squat should be a universal movement, that people have maintained from childhood.  Just last weekend at the PB One-Day, I herd Gray Cook note that if we squatted every day since the first time we did the movement, we wouldn’t have as many issues performing the movement that we do today.  Before I get into squatting every day, let me share with you some videos discussing how to regain your squat.

One of the best squat drills you can use is the Squat to Stand.  It eliminates the eccentric portion of the squat, so you end up starting the squat from the bottom position; just like you did as a toddler.  In the version you’ll see below, Mr. Gentilcore’s reaching over head, which helps drive thoracic extension and reinforce the bottom position, so focus on keeping your chest up while in the hole.  Check it out:

That deep bottom position is what we’re after, but it’s not going to happen for everyone, and you can’t just figure it out over night.  It takes attention to detail and practice before you can make it look clean.  Regular practice can go along way, and that drill above is something that you can do every day.  Another drill that I like to recommend comes from Jason Ferrugia, and it’s the bootstrapper squat.  I’ve found it to work very well for teaching that ‘bottom’ position, and developing mobility through the hips:

If you note the placement of the kettlebell in that last clip, you’ll see that it’s in the Goblet position.  If you were unaware, the Goblet position is the holy grail of squat loading.  (Get it?!)  It turns on the trunk and shoulder musculature, allows you to stabilize better, and therefore achieve a deeper, cleaner squat.  If you’d like some additional reading on the Goblet squat, you can read an article from the man that made it popular, Dan John.

Now that we’re discussing the squat as a loaded exercise, we’re opening Pandora’s box when it comes to variables.  To me, the largest variable between squats is how you’re setting them up.  There’s a big difference between a low-bar powerlifting squat and a goblet squat or front squat, isn’t there?  Typically, I’d recommend to that you start with a goblet squat until you run out of weight, then transition to a front squat, either with barbells or dumbbells on the shoulders.  (Back squats are usually much later on my list, unless you need to back squat.)  Regardless of how you’re loading the movement though, one thing will usually come up once you start to drop down:

It happens almost every time!  Your first rep or two will be noticeably deeper than the last two.  If this is a problem you tend to have, I’d recommend squatting to a box.  Note: Squatting to a box is NOT box squatting.

In a powerlifting box squat, you transfer your weight into the box, which helps you develop starting strength out of the hole.  It also can put extra pressure on your spine, so it’s not he most appropriate for all training situations.  Squatting to a box to gauge consistent depth, is a different story though.  If you’re using a box as a check-point for where your butt is in space, you’re simply reversing direction when your butt grazes the box.  Grazes, rubs against, comes in contact with; not bounces off of, slams into, or collides with.  It’s better to think of it as broken glass instead of a trampoline.

Look, squatting is a great exercise, but it’s not absolutely necessary for you to train well.  Most trainers will recommend some variation on the squat to you, and I’m sure that we’d all agree that a level of movement competency is important.  You should have the ability to squat comfortably, and preferably to a preferable depth.  Just so you know that I’m practicing what I preach, I knelt at my desk stretching my hip flexors while I wrote this, and I’m currently in a deep squat with my heels on an Airex pad. If you couldn’t tell, I love this stuff.

Finally, if you’re ever posed with the argument that squats are the devil or that you shouldn’t be squatting, refer to This guest post that Bret Contreras did for Tony Gentilcore’s blog, where he drops laser-guided knowledge bombs about squatting.  After that, go bust out some squats!

One Reply to “Scary Squats”