Of the vast clan of fitness magazines, the (Wo)Men’s Health couple from Rodale seem to be some of the best; they include exercise suggestions and programs from some talented strength coaches and trainers, and include a host of other information, such as the manta every man should master, information about a company that takes a one-for-one approach to home delivery contraception, and answers age old questions, such as “What’s Missing from Your Skin Routine?”

When it comes to the fitness advice from the magazines, I’ve had a complaint before, and I’m not quite sure how to begin this time. Maybe with a line such as “You’ve Done It Again, Women’s Health!”  Perhaps something in reference to the societal norms influenced by the Victoria’s Secret models.  How about I just combine them and say:

The cover story for the January/February 2012 issue features Marissa Miller discussing The Secret to Living a Sexier Life.  I perused the article before my mom got her hands on it, and  Marissa discusses a handful of topics, including faking confidence, diet tips, relationship advice, and using an anterior pelvic tilt to make your butt look better in pictures.  She happens to offer some good advice, even if the booty-pop doesn’t fool me in pictures.  Unfortunately, she also mentions exercise. 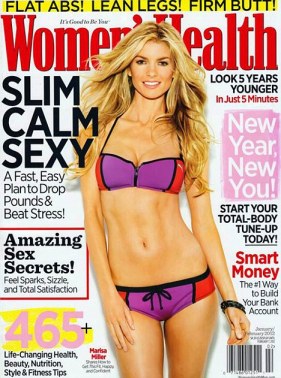 I’d be naive to neglect the fact that most folks consider the 33-year-old model to be almost as hot as the sun, and I can agree that she’s really really pretty.  Unfortunately, our skinny-obsessed society sees Marissa and other models as the epitome of aesthetics, and is quick to tie this in to fitness, health, and wellness.  Here’s a recent video (Fall 2011) of two of Marissa’s coworkers used to promote the VSX Sexy Sport line:

Am I the only one that’s confused by the fact that the Hollywood machine has duped us into thinking that a pretty face and the body of an undernourished 12 year old is attractive?  We’re quick to label any visible signs of muscle on a woman as masculine, and any outward displays of strength by women as masculine.  For example, in the video below you’ll see Jen Comas-Keck taking singles as she works up to her goal for the year, a 315lb deadlift:

Jen’s a total bad ass; she’s part of the Girls Gone Strong crew, and it helps that the cues you hear in the video are from her husband Michael Keck who’s an accomplished powerlifter.  I think it’s safe to assume that the writers that I follow would watch Jen’s PR video, provide a celebratory fist pump and say “Nice work.”  I’m also going to assume that most non lifters or coaches will watch that video and include thoughts of “What’s she training for?”, “She’s going to get big, isn’t she?”, and “OMG That’s so dangerous, I’ll stick to Zumba and hot yoga.”  Come on!  What’s with our fear for strength training?  Why do we find under-muscled gangly models to be more attractive than people who look like they are physically active:

If you no longer need convincing that picking up heavy objects is going to help you look better than flopping around on a Swiss ball, then check out Nia Shanks’ list of 11 beginning strength training tips for women that’s applicable to everybody.

The fitness world seems like a highly polarized microcosm of society, where men can only focus on maximal strength and women are relegated to treadmills and group exercise classes.  It’s a very distinct his/hers culture, but why can’t we have it all?  Come to think of it, I was discussing the benefits of yoga with a new male yoga instructor at my gym on Tuesday morning, and I spent some time last week showing one of our new female trainers some progressions and regressions with the TRX.  That was rather nice.

Let me leave you with one last video, from a toddler who’s yet to be indoctrinated by the likes of society:

Riley, you’re on to something here.  You’ve figured it out at a young age, and I hope you never forget that girls (and boys) can be princesses and superheroes.  And, not or.  When it comes to exercise, I’d like to see a coming together of the polarized philosophies: Girls focusing on picking up heavy things like Jen does above, and avoiding some of the exercises that the Angels demonstrate in their video.  Guys considering movement and mobility, and performing strength exercises through a full range of motion, focusing on getting stronger and not just moving more weight.

I dream of a day where we can all chin, deadlift, and sprint in harmony.

(Hopefully Riley would appreciate my recent purchase of pink earbuds to use at the gym.  I tend to break headphones on a regular basis, and my most recent color choice is a reminder to relax, smile, and enjoy myself.  While trying to pick up heavy things.)

7 Replies to “These ‘Angels’ Are Too Weak”