I spend Super Bowl Sunday at my friend Mara’s house, and at some point during the game exercise came up in conversation.  I’m not exactly how it came up, but my memory begins with me scoffing at two of my female friends for bonding over a shared love of Lululemon clothing.**  After my comment, one of my buddy’s new girlfriends, who I had just met, mentioned hopping on the eliptical, cranking up the tunes, and getting into her groove.  He tried to quietly warn her about what she just said, but it was too late.  A silence descended on the room.

Mara broke the silence with a short and direct, “Harold hates cardio.”

Super Bowl Sunday isn’t the time to go on an enthusiastic rant about exercise programming and time investment, so I laughed it off, and the conversation went on.  In my head, my carefully constructed explanations and arguments against traditional aerobic training growled like angry dogs held back by a leash.  They calmed down, and the night went on as we watched the Giants win.

I’ve gotten pretty good at and weaving an elaborate exercise web of logic, reinforced by knowledge bombs, that would make Kevlar look paper thin.  Depending on who I’m dealing with, I’ll adjust how I explain it, but it typically comes down to the same things:

It usually takes some rambling for me to get to my point, but after something I saw on Tweeter this morning, I’ve found a much more concise way of explaining it.  (Yes, I know it’s not actually called Tweeter, come on!)

I’m an absolutely huge fan of the Girls Gone Strong, a group of 7 of the best minds in the business regards to female strength and conditioning, nutrition, and health.  The article that is referenced in the Tweet is from Neghar Fonooni’s blog and does a great job of explaining the bang-for-your-buck benefits of strength training.  Not every rep is equal, and a single deadlift or chin-up is going to do a lot more for you than a step on the treadmill.  Please check out Neghar’s article here.

It’s not that cardio is bad for you, and anyone that would lead to you believe that is being a little foolish.  (Check out an awesome post about this from Mark Young.)  Instead, it’s about the hierarchy of training priorities, and addressing the right ones in the right order.  Alwyn Cosgrove has created a Hierarchy of Fat Loss that I refer to on a regular basis:

Basically, you need to get your diet in check, you need to lift, sprint, sprint a little bit slower, then after you take care of all of that, add in some lighter intensity activity, which we typically refer to as cardio.  There’s a hierarchy, and you’ll see numerous improvements in your results if you focus on addressing the first items on the list.  If you check out the GGS video below (Which I’ve used several times before), it’s apparent that they’re putting their training priorities in the right places:

The Girls Gone Strong are helping to shatter the glass ceiling that the industry tends to put on female fitness levels;  It’s not all about yoga, pilates, and body pump classes.  Conversely, I know a lot of women that have this mindset: 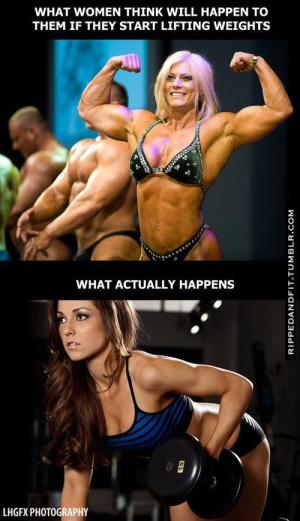 Without pharmaceutical and surgical assistance, you’ll never look like the female bodybuilder in the top picture.  While I wish she was rowing a little bit more weight, the dumbbell bent over row in the bottom picture is a much better investment of time than hot yoga or tricep kickbacks with those color coded paper weights.

Traditional ‘cardio’ definitely has it’s place and time.  When it comes down to it, sure, it’s definitely better to do it than to skip it entirely.  However, it’s going to pay greater dividends for you to practice dedicated strength training using natural movement patterns, get strong, and improve your overall fitness, health, and wellness.

**  It’s not that there’s anything wrong with clothes from Lululemon, it’s just that the that the company markets themselves for yoga and running, which are still touted as the panacea of fitness; That rubs me the wrong way.  They’re important to overall fitness, yes, but can’t offer the same benefits as dedicated strength training.  I’m not sure if you’re aware of my obsession with Under Armour, but I appreciate all of the UA clothes the women are wearing in that video.  If you happen to be someone that wears your Lulu clothing while deadlifting in Vibrams and and swinging sledge hammers at tires, then that’s totally cool with me.