I’m in the middle of an almost four week long stretch of awkward scheduling. My schedule changed slightly during winter break, I then had a deload week, and my next two weeks change a little bit because of my upcoming trip to Boston.  I’m excited about it, but I still need to train; schedule changes are in order.

I’m taking this time to play around and consider possible modifications that I may apply to my training.  During this short time period, I’m going to focus on some exercises that I’m not used to or totally suck at, so that they can catch up a little bit.  For lower body lifts, the two that will get the most attention are the front squat and the single leg deadlift.  Basically, I’ve been terrible at both of them.  I’ve really only front squatted to practice my clean, and I’ve been negligent with my single leg deadlift technique, and tip over quicker than the Costa Concordia.  Too soon? 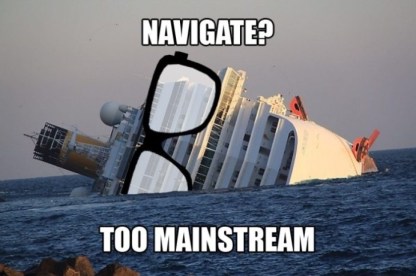 After some foam rollin’ and lax ballin’, I went through my mobility drills and then started practicing my ass-to-grass front squats.  I’ve recently found that I have way more fun when I’m squatting lower, with both back and front squats, instead of squatting to parallel.  It just feels awesome.  Other than front squatting though, I have two great exercises to recommend to you today, and they were both in my 2nd exercise pairing for the day:  Single Leg Deadlifts, and an Anti-Rotation Crunch.

Due mostly to impatience, I’ve never really been successful at doing single leg deadlifts.  I’ve been taking the time to practice getting back into my hip in recent training sessions, and have practiced several patterning drills as well as the body weight pattern.  I just began loading the movement last week, and it’s coming along nicely.  Several of the drills that I’ve been using come from an article from Coach Kevin Carr, appropriately titled: “Correcting and Progressing the Single Leg Deadlift”.  I would strongly suggest that you read it if you’re interested in better learning the movement.  Below you’ll see a video of the incredibly strong Neghar Fonooni banging out SLDL’s with 160lbs at a body weight of 123lbs.  That’s silly strong:

Bonus points for Incubus in the background.  It’s essential that you keep your hips square to the ground, like Neghar does.  Kevin discusses this in his article, and I’ve found that the best tip is internally rotating your foot on the trailing leg.  This usually helps to keep your hips from opening up, and you’ll immediately feel the difference in your glutes and hamstrings.

Along with the single leg deadlifts, I also performed an anti-rotation crunch that I saw in Ben Bruno’s most recent “For Your Viewing Plesaure”.  In the video Shyam Soin uses a TRX Rip Trainer to provide an anti-rotation component to a curl-up.  When I first saw the video it looked really easy, which is generally a good indicator that something is difficult.  I don’t have a Rip Trainer, but used an exercise band that was anchored on a power rack.  It’s also possible to utilize a cable station to create the challenge as well.  Check out the exercise below:

That exercise is deceptively hard, and it’s definitely something that I can work into my programming and clients programming, to provide a nice core stability/curl-up challenge.

To finish out today’s workout, I ran some sprints on Adelphi’s indoor track with 3 of my friends.  We paired off and ran head-to-head sprints, probably approximately 40 yards, and alternated who ran against who.  It was a blast to race somebody, and we were pretty competitive about it.  If I have anything to say about sprinting, it’s do more of it, and that racing an opponent of similar speed is a great way to provide a nice competitive spark to your workout.

That’s it for today; let me know if you incorporate front squats, single leg deadlifts, anti-rotation curl-ups, or sprints into your next workout, and how you feel during or after the exercises!

2 Replies to “Front Squats and SLDLs: Bringing Up Weak Lifts”