This afternoon I enjoyed one of those moments where something scary happens so quickly that your brain experiences that same lag you get when you open all of Ben Bruno’s Good Reads in Firefox.  Maybe my computer is just getting old, who knows.

On the way to the gym this afternoon, just blocks from my house, I was approaching a spot in the street that had two panel vans parked across from each other, which made the road too narrow for two cars.  A third panel van was barely moving, so I steered towards the Hot Gates, only to have this brazen buffoon drive into the space as well.  I had about 3 milliseconds to mentally prepare for my car to put on a Ford EconoLine corset.

Fortunately, the Mazda somehow pulled off the get-skinny trick that The Knight Bus uses in Harry Potter and the Prisoner of Azkaban, and I felt like Ernie Prang.  Cue video:

I will almost swear the car got skinnier to fit through the gap, but I know that’s not practical.  I completed the trip and cursed my adrenals for dumping adrenaline into my system, and was happy to get on to my workout.  After some foam rolling and movement prep, I got around to squatting (weak), conventional rack-pulling (weak), single leg deadlifting (eh), and then I moved on to a glorious finisher.

That was the 3rd set of 4, and I took about 1 minute rest between each one.  It was basically ten minutes of awesomeness, and my legs are feeling it several hours later.  I’m on a bit of a lunge-matrix bender, and have used them a number of times in the past month.  Proceeding the lunges with kettlebell swings definitely upped the ante for this one, and was well worth it.  If you can, give this one a try.

I’ve seen a variety of ‘lunge matrices’, and it’s quite easy to decide what to do on your own.  I prefer the forward lunge/ lateral lunge/ reverse lunge combination, but you can include rotational lunges, curtsy/scorpion lunges, walking lunges, or whatever your hamstrings desire.  I’d caution against using a new lunge pattern during the finisher for the first time, because it might surprise you with some nasty DOMs.  (Three weeks ago; lateral lunges.  Damn you, lateral lunges.)  Rep ranges can vary from anywhere between 3 to 12 reps per leg, depending on how many movements and rounds you’re using.

Ideally, the movements that you choose will allow for a full range of motion, and won’t contribute to any pain or soreness, but will drive your heart rate through the roof.  I see the top benefit of these matrices as allowing for continuous movement without localized fatigue in a single muscle; you won’t need to stop so your fill-in-the-blank can recover.  Everything is equally shot from the waist down.  Try it out and let me know how it goes.  Maybe you’ll even include a lunge like this: 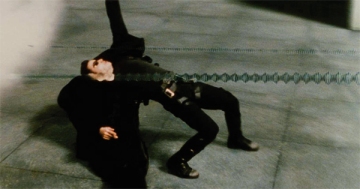 After references to Harry Potter, 300, and The Matrix, this post is over.

2 Replies to “The Knight Bus Finisher”