How many people do you know that don’t move?  I know tons.  I include the people that have desk jobs and don’t exercise at all, as well a those that go to Spin a few times a week.  I include the people that train 7 days a week, even some that train twice a day.  Oh you lift in the morning and do ‘cardio’ at night?  I don’t see you moving.  Hell, I’m a victim of not moving very much, and I would bet that you’re guilty of it, too!  You know who probably moves more than us?  The people in Zumba; good for them. 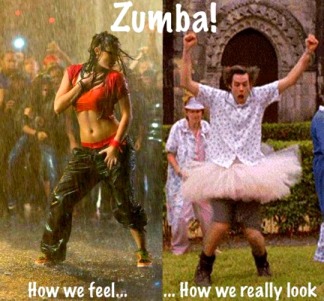 Yes, you’re correct, Zumba usually splits time 50/50 with Yogalates as the butt of my jokes, but I do see some merits in it.  In fact, if someone was to choose between running/cycling on their ‘off’ days and going to a Zumba/Yoga class, I’d probably recommend the classes instead.

Relax, relax, I said on your ‘off’ days!  Strength training should still take priority in any training program, but if you’re one of those “7-days-a-week” types, you’re going to do something on the days you’re not getting strong as hell.  Perhaps 3-4 times a week you’re squatting, chinning, doing push-ups, and sprinting up a hill. You know, the stuff that makes you look awesome naked.  On those other days.  You might want to do something to stay active; but you can’t be training hard all of the time.  For your lower intensity conditioning, why not attend a Zumba class instead of a run on the treadmill.  Maybe you can add in a yoga class or mobility circuit to address poor movement quality.  We now pause for a reminder on training emphasis:

Your emphasis should still be getting strong as hell.  If you’re not trying to get stronger, then cut out the frou-frou Zumbilates crap and get strong as hell.  Oh, now you’re strong?  Enjoy your classes on the off days.  Yes, I said off days.  Zumba is dancing; sure you get sweaty, but it’s not exactly the best thing to help you look better naked.  Neither is yoga, for that matter.

They both engage you in movements that you wouldn’t otherwise do, which I like for the fascial health and movement benefits.  Your brain and your myofascial system will love you for this.  Importantly, we can’t forget that most people have a blast, and you can’t really go wrong with a few extra smiles in your life.

You may seem surprised about this pseudo-recommendation of Yoga/Zumba/what-have-you, but it’s based in our body’s need for movement.  We spend too much time sitting and shuffling and slouching, and our exercise at the gym typically represents this.  Everything is forwards and backwards, up and down; it’s rare to see anything going side-to-side or rotating; it’s rare to see movement.  Even in typically strength training programs, we see people with strong deadlifts and bench presses who can’t take a lateral lunge or throw a medicine ball sideways.

Considering this, I wanted to share with you a handful of exercises that are slightly more complex than those we typically see or use in the gym.  These require more coordination and diversity of movement.  If you’ve spent too much time in “box” gyms going through bicep curls, calve raises, and eliptic-ising, this may be great additions to your program that help you move more and feel better.  Check them out:

We’ll start with a TRX rowing variation, the Grappler Row.  I’m a fan of this one because it requires you to pull and push in a single exercise, and you have to generate and resist rotational forces through the trunk and hips.  This one requires you to use a whole lot of muscle, and can be used as a strength exercise as well as in conditioning circuits.

Crawling patterns are absolutely awesome.  Your moving at the shoulder and the hip, but your trunk has to remain steady.  It’s a great core exercise, helps develop should stability and hip mobility, and is awesome for conditioning; you’ll see some ore of that later.  Here’s a video of me demonstrating a Bear Crawl pattern.  If you’re reluctant to do this on your own, just get on the ground next to your favorite 1 year old and you’ll blend right in:

Since first seeing and experimenting with the Rainbow Deadlift several years ago, I’ve been a fan.  Firstly, it’s a deadlift; Yay!  More importantly though, it requires impressive stability through the trunk in addition to hip mobility.  If you’re doing it right, you’ll feel your hamstrings/glutes, abz, and lungs all lightening up.  Here it is:

If you don’t have access to a landmine/barbell, or aren’t exactly comfortable with that movement, here’s a rotational deadlift variation using the Ultimate Sandbag.  This one requires the same combination of core stability and hip mobility, which is exactly why I like both of them so much.  I used these rotational deadlifts at the Perform Better One-Day I attended, and got smoked with a pretty light bag (~60lbs, I believe.)  Here’s Josh Henkin showing you how it’s done:

Most folks need additional stability through the trunk and shoulder, as well as thoracic mobility.  I like the prone t-rotation because it addresses all three.  You’re essentially performing a plank and overhead reach, and this allows you to strength both the trunk and the shoulder.  I’ve programmed this both as strength work and as part of a metabolic conditioning circuit, and I’d suggest you start with it as a ‘core’ variation, and once it feels comfortable, incorporate it into a finisher:

I picked up the Slosh Ball Ribbon Chop from Robb Rodgers at the 2011 Perform Better Summit, and have loved it ever since.  It really hammers core stability (anti-extension, anti-rotation, and anti-lateral flexion), and can really burn up your hips depending on how much hip flexion you allow.  This one’s deceptively difficult:

Locomotion patterns are becoming increasingly popular in warm-ups and during conditioning activities, but they’re usually disregarded by trainers and clients as being specifically for athletes.  To be concise, this is bullshit; everyone should use them.  It’s a great idea to use series of locomotion drills and crawling patterns for sustained conditioning activities, and they’ll provide your body with a stimulus I’m sure you’re not accustomed to.  I love running sprints, but I find that some of my best conditioning involves running cariocas and bear crawling back to the beginning.  Here’s a video from Nick Tumminello demonstrating two of his clients doing crawls and locomotor patterns:

Finally, to close things out, here’s a video from Erwan LeCorre of MoveNat that I hope can inspire some outside-of-the box thinking.  It’s important that we include natural movement in our daily lives and our training programs, and the exercises above, and this final video, should give you some ideas of how you can make sure you move.

One Reply to “Make Sure You Move”