There’s a guy at my gym who is referred to in casual conversation as “Moon Shoes” because of the leaf-spring ski boot contraptions that he wears to the gym.  He’s been doing it for about a year now, and without fail he spends at least 30 minutes, 3 times a week bouncing around like a drunk kangaroo in these shoes.  If that alone doesn’t make you think it’s ridiculous, he once justified it by saying, “Come on, Kim Kardashian wears them.”  Right, because that makes it okay. 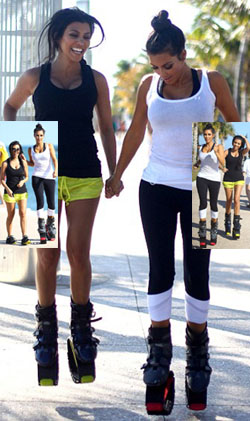 Mr. Moon Shoes gave a compelling sales pitch about reduced joint impact and lymphatic flow, and that it was more fun than walking on the treadmill.  He even commented on the silliness of my Vibrams; the nerve of him!  When he first began his Neil Armstrong reenactment, I gave him a quick explanation of the hierarchy of fat loss suggested several basic exercises for him to begin with, and then went on my way.  We bumped into each other about a week ago, and I could see the anticipation on his face.

“I know you think these don’t do anything, right?”

“No [Moon Shoes], you’re always in here sweating up a storm, good for you!”

This guy isn’t an ‘exerciser’, but he is someone who has battled with being overweight for a good portion of his life.  He’s recreationally active and tries to eat well, but he’s still fighting with some components of the metabolic syndrome.  Given his intermittent history with regular exercise, I’m actually glad that he did not listen to me.

I can say with some confidence that I don’t think he’d have been at the gym a year later if he had scrapped the bouncing for a dedicated strength training program.  He wasn’t mentally prepared for it, and I’ll admit that I wasn’t prepared to explain or detail a program that would have made him more comfortable.  I’ve been busting my butt to learn more about communication and relationships, and while I’ll certainly still play the elitist training card with some folks, with most people I’m more about kudos than anything else.

Recently, I’ve been much more lax in promoting movement and exercise in general, because it goes over better with clients, and because it’s healthier in the long run.  A fella’ that I’ve worked with, Jonas, grabbed me at the gym and said, “Harold, you’re not telling people cardio is bad for them, what’s going on?”  Now, Jonas is smart enough to know that I didn’tmeanthat cardio is bad, but that strength training provides a higher metabolic and aesthetic pay off.  His statement meant a lot, because whilehe knew what I meant, there are plenty of people who take this to mean that doing ‘cardio’ is bad for you.  I’m working on the communication breakdown, people!

In February, I touched on this in a post about the difference between advising against cardio or promoting strength.  I think that this tweet from the Girls Gone Strong says it best.  (The picture should link to Neghar’s article.)

Strength training offers a plethora of benefits, and most programs should focus on strength development, but that doesn’t mean that doing cardio is going to be bad for you.  In the words of Todd Durkin, “More cardio, less lard-io!*”  If I bastardize some Alwyn Cosgrove while I’m at it, that asterisk means “You should clean up your diet and do some strength training first!”

While I’m referring to awesome coaches, Jon Goodman of the Personal Trainer Development Center posted a status to the ‘Book about cardio for clients, and that we should be promoting aerobic activity outside of the gym.  A year or 6 months ago, I’d probably have said something aboutDo you even lift?, but now I’m excited to see people moving, sweating, and becoming healthier.

I began working with a new client recently, and was explaining to her the interfaces on the new treadmills/ellipticals at the gym.  Of all people, my mom came over to say “What are you doing over here?”  Really funny. My client and I were discussing the ‘cardio’ side of her training, and while she’s ‘lifting’ twice a week, including a finisher, she’s also including some cardio.  For her, it’s a mental health goal, and she finds that she can be “free” from her regular stress.  If that makes her feel better and compliments my programming, everyone wins.  (If you’re curious about the role of the elliptical in her programming, that’s her go-to cardio source if she’s trying to sneak in some conditioning on days directly between strength training; I don’t want her osteoblasts to hate me too much.)

As for Mr. Moon Shoes, he doesn’t look that much leaner than he was when he started this Kardashian Konditioning program.  You know what though, he looks a hell of a lot happier, and he has a freaking’ blast while he’s  playing kangaroo.  He’s moving and grooving, and there’s a smile on his face.  Who the hell am I to not tell him that’s awesome?  It may not be a form of exercise that I’d recommend, but he’s moving and that’s better than him sitting on the couch at home thinking about some ass of a trainer that rambled on about the importance of the hip hinge.  When he’s ready, he’ll try it out.  For now, I’m going to make sure he’s there on a regular basis.

Now I’m off to do a body-weight recovery workout to prepare for some heavy deadlifts and hill sprints this weekend.