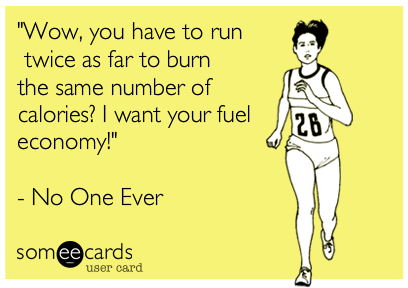 I’m coming to you live from a coffee shop in Newark, Delaware.  It’s called Brew Ha-Ha and they make a killer Pumpkin Patch Latte.  The place is buzzing with caffeinated co-eds studying architecture, discussing sorority soirees, and a first year ex-phys student telling his girlfriend that that the links between Q-angle, menstrual cycle, and ACL injuries in female athletes are overrated.  I sure hope she doesn’t play soccer.

Everyone is busy interacting, and I’m thinking about the fuel economy in my ’96 Mazda Millennia that turned 100k last year.  She’s still going strong, but has pretty poor gas mileage.  Ironically, her fuel consumption is on my mind because she barely used any gas on the way from New Yawk to Newark.  There’s minimal traffic at 9pm on a Thursday night, so I was able to set the cruise control, crank up the tunes, and chat with my friend Jason.

It’s common knowledge that if you’re cruising at a steady speed, your car consumes fuel at a steady rate.  We also know that stop-and-go traffic is problematic for the consumption conscious commuter; It’s when you’re dancing between the accelerator and brakes that your mileage plummets.

Guess what? The human body acts the exact same way.  I know what you’re thinking:

Since Dr. Cooper dropped “Aerobics” in 1968, we’ve celebrated all types of walks, jogs, 5k’s, and marathons.  We love talking about the feel-good runners high, the benefits to cardiovascular health, and the chance to clear our heads.  Active individuals, I applaud you.  However, if you’re looking for fat loss and overall aesthetic improvements, stop acting like a damn Toyota Prius. You’re a Nissan GT-R, dammit!

Debating the performance/economy connections is important in the Automobile section, and fuel economy is great for your car, but not for your body.  We love getting as much as possible out of our liters of petrol*, but why would you want your body to be more fuel efficient?  If your car has a 50 mile greater range than your neighbors, good for you.  If your body does, not so much.  Consider caloric expenditure in terms of fuel economy. I made this for you: 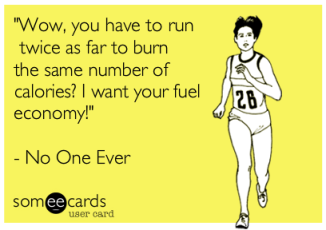 Most of us want to be as inefficient as possible.  We want our body to burn through as many calories as possible throughout the day, and we do this by creating setting our internal engine, our hormonal environment, to torch through calories.  We do that by acting like a sports car, not a wallet-friendly commuter.  Performance and aesthetics aren’t directly linked in cars or people, but they’re pretty damn close.  Exercise like the car you want to look like.

If your goal is to strip fat and build muscle, think Nissan GT-R.  Strength training, interval-based conditioning, and a high-quality diet will give you the best results.  The resultant hormonal changes will help you become a lean, mean, gas-guzzling machine. There isn’t anything wrong with driving a Prius, and for endurance performance, you have to put in your miles.  For aesthetics, training like a hybrid won’t be the most conducive to your aesthetic goals.

Hopefully as technology in the automotive industry improves, this metaphor will begin to suck.  We’ll have high-performance hybrids to go with some of the ugly muscle cars.  Until then, be sure to eat right, move well, get strong, and sprint.