Benjamin Franklin wanted the national bird to be the Wild Turkey.  Benny F was a great inventor, but I’m glad that this idea fell through.  Can you imagine a turkey as the national bird?  They can’t even fly!  Eagles can do cool shit like this:

(Don’t worry, the eagle wasn’t hurt; PETA supervised the filming of that clip.)

Eagles, and raptors in general, have wings that make most meatheads jealous.  While the musculature is different, we take some notes from the Bird of Prey Manual for Vertical Pulling Power*.

First of all, use vertical pulling exercises. Pull-ups, Chin-ups, every grip combination you can think of, lat pull downs; there are plenty of options out there!  I’m going to advise that you use a device that lets you rotate your hands, or alternate between supinated, neutral, and pronated grips.  You can use an Iron Gym at home, or use something like the Stamina Rotating Handle.  Here’s an example using a TRX:

If you don’t have access to a TRX, I like a larger-than-normal bar and an underhand grip the best:

Perhaps you’re using pull downs as an alternative, and that’s cool, too.  Vertical pulling in almost all variations, is going to be good.  If I had to choose just one variation, it would be the chin-up.  I’ve always enjoyed them, and I’d like to share with you a nice incentive system created by my friend Kyle that we’re using with female lacrosse players.

Kyle created a chin-up/inverted row trade off system that subtracts reps from a goal number of reps.  We were looking at a total of 40 inverted rows over a 10-15 minute window during a set of three different exercises.  That was the minimum number of rows to do, and each of the girls were to attempt chin-ups.   If you completed 1 chin-up, you subtracted 3 reps from your total.  If you completed an eccentric chin-up, you subtracted 2 reps.  Sounds simple, right?

The day we implemented this system, the number of athletes attempting chin-ups almost doubled.  Once this new bar was set, the competition and motivation to raise the bar was astounding; there were chin-ups left and right!  Here’s an example:  If an athlete completed 3 chin-ups, her “total” number of rows dropped from 40 to 31, and she completed 31 rows and 3 chin-ups for 34 reps total.  If we ran the numbers on the percentage body weight being moved during those chin-ups, there’s less reps but more work during the training session.  They were so eager to demonstrate strength and be competitive that they didn’t realize it was harder!

When it comes to vertical pulling strength, the chin-up might be my staple, but almost all vertical pulling variations are going to help you get stronger and build wings like an eagle.  If you’re struggling to include chin-ups in your workout, perhaps implement a system like the one Kyle created, and challenge yourself or a partner to complete as many reps as possible.  There’s less pressure because you’re not stuck with a single exercise, and you’ll be able to build strength with one exercise while maintain strength with the other.

As you get stronger, you can load your chin-up, and eventually you’ll put that eagle to shame!  Here are excerpts from the Child and the Eagle, after they did a post-incident interview.  It was really just a big misunderstanding! 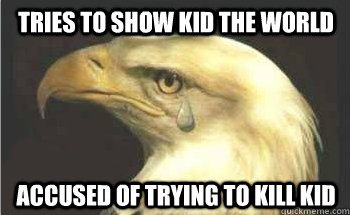 *If there’s ever a demand for veterinary exercise physiology, I’m totally writing that book.