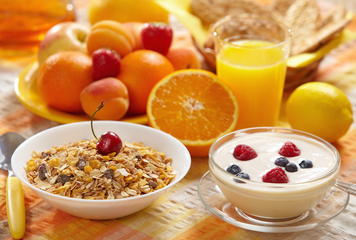 There are two things that I eat at diners: Scrambled eggs and salads.

Recently I’ve been erring towards salads, avoiding the possibility of a subpar scramble.  Not that I’m biased, but I might make the best scrambled eggs in the world.  The last time I ventured outside of that was having pumpkin pancakes at 10am on my birthday.  I like to remind my Mom that it was a big deal.

I’m a fan of breakfast food.  Scrambled eggs, bacon, sausage, steak, home fries, the occasional oatmeal.  My childhood favorites of waffles, french toast, and pancakes are treats on occasion.  Thing is, I hate eating those foods at “Breakfast Time.”  According to the Democratic Republic of Wikipedia:

“Breakfast is the first meal taken after rising from a night’s sleep, most often eaten in the early morning before undertaking the day’s work...Among English speakers, “breakfast” can be used to refer to this meal or to refer to a meal composed of traditional breakfast foods (such as eggs, oatmeal and sausage) served at any time of day.”

See I love breakfast, but I don’t like eating at breakfast time.  What I like even less is breakfast zealots.  It seams that if you suggest anything other than a carb heavy breakfast, you’re damning them to a life of misery.  Typical reaction:

The assertion that breakfast is not that important scares a lot of people, and from my observation, they fit into two groups; older people who are overweight, and younger people who are underweight.  Distinctly different groups, with one thing in common:

Thanks to strong marketing campaigns from food companies and their lobbying of the health-oriented government organizations, we’ve all grown up learning that if you don’t eat breakfast, horrible things are going to happen.  Really awful things, like being hungry for an hour or so.

Alright, I’m kidding.  If you’re prolonging your fasting window beyond your waking hour, you’re not doing anything new.  What happened centuries ago when we had to wake up and hunt/gather food every morning?  What happens to the 868 million people (12% of the global population) that the FAO estimated to be undernourished in 2012?  Going a few extra hours without food isn’t exactly a bad thing.  In Experiments With Intermittent Fasting, John Berardi wrote:

Data show that IF, when done properly, might help extend life, regulate blood glucose, control blood lipids, manage body weight, gain (or maintain) lean mass, and more.  Rather than something we’re forced to endure – a result of poor food availability or cultural expectations – IF is becoming something that health and physique-oriented people are seeking out in order to keep their bodies in top shape.  These include:

Reduced:
• Blood lipids (including decreased triglycerides and LDL cholesterol)
• Blood pressure (perhaps through changes in sympathetic/parasympathetic activity)
• Markers of inflammation (including CRP, IL-6, TNF, BDNF, and more)
• Oxidative stress (using markers of protein, lipid, and DNA damage)
• Risk of cancer (through a host of proposed mechanisms; we’ll save them for
another review)

• Appetite control (perhaps through changes in PPY and ghrelin)
• Blood sugar control (by lowering blood glucose and increasing insulin sensitivity)
• Cardiovascular function (by offering protection against ischemic injury to the heart)
• Effectiveness of chemotherapy (by allowing for higher doses more frequently)
• Neurogenesis and neuronal plasticity (by offering protection against neurotoxins)
Wowzers, this is what happens if you wait a little bit more time before you eat your first meal?  Where do I sign up?
Not so fast.  If you’re accustomed to crushing Fruity Pebbles for breakfast, then you’re not going to feel so hot jumping on the intermittent fasting bandwagon.  Let’s face it;  breakfast doesn’t always suck, but this one does*:

Most who follow a ‘typical’ diet will realize some of the physique improvements of intermittent fasting simply by cleaning up the processed food in their “dirty” diet.  When your list of “Things I only have once per week” includes pizza, ice cream, pasta, cake, hotdogs, and other American staples, you better own up to the fact that your diet isn’t as healthy as you’d like to believe. While simply waiting to eat works for some people, I’ve found it more appropriate to guide clients towards replacing the cereal-and-OJ breakfast for veggies, meat, or nuts.  Oh yea, and scrambled eggs.

Two recent discussions about breakfast are stuck in my mind because I caught off guard in my observation and participation.  Each discussion occurred at the gym, one with an older man who trains for fat loss, and the other with a high school student who wants to get hyooge gunz for the ladies.

The overweight man is enjoying late-middle age, wants to lose some weight, and is preparing for the upcoming golf season.  His trainer is doing a bang-up job with his golf prep, and while changing before their training session one day he was waxing poetic on the merits of a carbohydrate laden breakfast to fuel you throughout the day.  I meandered past the conversation, and was turned to for input.  When I disagreed with his statements, I was dismissed.  Crazy kids.

I’m not sure that I’d ask someone who takes multiple medications for preventable conditions and is pre-diabetic for nutritional advise.  I can only assume his peers have the same biases I do, and took this into account during their conversation.

While benching on a Saturday, the high school student asked me, “Harold do you still do that thing where you starve yourself?”  What.  How many times have we had this conversation?  I replied, “Yes, I’m still doing that thing where I starve myself…I’ve put on twenty pounds in a year and a half.”  The puzzled looks from his bros were priceless.

Feeding frequency was clarified as the conversation closed, and I’m happy as hell that a 16 year old is in the gym 5 times per week instead of playing video games.  That being said, the lag in the fitness/health world is awful.  There are so many ‘get hyooge quick’ systems out there that after 3 months folks try to step into the ring with Ali because they think they can gain.

The obsession with breakfast is strong in the fat loss and hypertrophy markets, which makes it a tough topic to cover.  You mean to tell me that changing feeding timing can help one person burn fat and another person build muscle?  Yes.  Unfortunately, the frequent response is this:

In the following frame, Tony Bonvechio would school the Batman by asking:

What’s weirder – the fact that I skip breakfast or the fact that you eat 8 small meals a day to “keep your metabolism up” and you’re still out of shape?

If you’re holding on to the belief that breakfast is the most important meal of the day, ask yourself why.  Seriously, ask away.  I’ll wait.

If you love eating breakfast, then we’re in the same boat.  I’d eat “breakfast food” for 90% of my meals, followed by Chipotle, sushi, and ice cream.  Thing is, I’m not as obsessed with the timing of the meal because I still get to eat delicious food and the day doesn’t begin with food prep.  I’d rather spend that time helping clients kick ass at the gym or consulting with my distance clients.  Occasionally, I’ll write for ze blog.

Don’t get it twisted; if there are breakfast people, I am one of them.  I recognize that we have a natural desire to eat.  If we didn’t, we would die.  That takes a while, as in weeks.  Cramming  Pop Tarts and Frosted Flakes down your gullet 15 minutes after you wake up isn’t the most important part of waking up.  If it is, let’s take a step back and chat about what’s going on.

*Credit for that line goes to Tony as well.  My boy’s wicked smaht.

7 Replies to “People Who Love Breakfast Drive Me Crazy”

Reminder: There are no mandatory exercises.
Thanks so much for this post @mffclubhouse, and thanks @nedfedbed
One of the things that I've been focused on recently is choosing exercises that use more easily accessible equipment.
We got my niece a balance bike for her first birthday.
Are you familiar with the advice to "diversify your portfolio"?
Check out this 2-Point Bent-Over Supported Row.
Loading Comments...
Comment
×
%d bloggers like this: