Americans are a little naive.  You’re not having a bad day if the worst thing that has happened is a line at Starbucks, or you have a flat tire.  We pride ourselves on having “Freedom”, but we have less “freedom” than most of the world.  We also thought that the Patriot Act was a great idea, until Edward Snowden turned on the spotlight.

This isn’t a political statement; I just think it’s a little bit silly that people were actually surprised that the NSA was collecting metadata.  Come on, really?  I’ve been casually sending my brother texts with trigger words for years, usually when he’s traveling.  It’s not about having an awesome sense of humor; I’m trying to give the TSA more people to harass.  Basically: 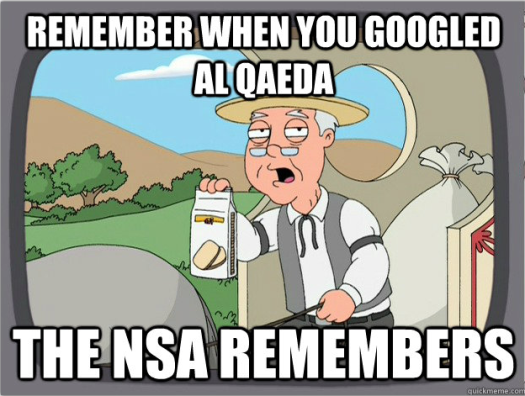 We’re done being surprised, so let’s get outraged.  Not at the NSA, but perhaps about the sites and services that may or may not have been privy to what was going on.  Let’s also be outraged that I think PRIZM could be a damn good idea.

I know what you’re thinking, and like usual, I’m sarcastically marginalizing an important issue and relating it to fitness.

I wish that the NSA had tracked fitness.  (<- Whoever is reading this in an underground bunker in Nevada, please sit up straight.)  Seriously, we’d be in a lot better shape if the NSA tracked fitness.  I don’t mean just tracking what you do on the interwebz, I mean everything.

For example, if they were really on their spy game, obesity wouldn’t have been considered a disease.  Why?  Because this would happen everytime somebody tries to buy cereal:

Wouldn’t that be awesome?  How great would it be if every time you decided to stay home instead of working out, somebody dragged you off of the couch?  If you went for a walk instead of a farmers walk, somebody strapped 100lbs into each of your hands?

“But Harold, that would make them the fitness police, and that’s wrong!”  Look, asshole, obesity is now a disease, and an expensive one at that.  Among employees and dependents at the Mayo Clinic, medical costs for an overweight person were $1,850 for an overweight person than for someone of healthy weight.  We complain about a gym that’s 2 miles away and $9 per month, but we’re fine picking up insulin and Lipitor from the pharmacy and paying into the insurance system.

Maybe instead of slapping the cereal, the buy should be slapped.  After all, they’re making all of the wrong choices, right?

If we’re stuck on single factors, we’re back to nativity.  It’s the fault of physical education.  Health education.  Marketing.  Grandparents who undermine good parents,  and vice versa.  It’s the insurance industry, it’s the fitness industry, it’s you, and it’s me.  So do we need more of this?

People need more support and responsibility, and both are learned behaviors.  We need to learn how to encourage health enhancing behaviors, and support our tribe even when they step off the path.  We also need to learn to take a greater responsibility, rather than blaming genetics, the way your friends eat, or what you grew up doing.

We need to be our own NSA; our own health & fitness police.  And, just like the NSA, we need more whistleblowers.  We need friends that will call us out on the occasional bullshit workout or too-frequent cheat meal, so that they stay as “occasional” and “infrequent.”  We need to check out what our friends do a little more often, and we need to step up what we’re doing as well.