H – “Because that’s my favorite lift.”

B – “Harold likes deadlifting so much that he did deadlifts on Saturday to warm-up for his bench press!”

The conversation above was with one of our high school athletes at Prospect Sports.  You can tell that max doesn’t like to deadlift, and you can also tell that I’m addicted to deadlifts.  I’m also addicted to chin-ups.  Here are several reasons why:

In the last few weeks, I’ve noticed an increase in the number of “What do I do for this muscle?” questions at the gym.  It’s the the outer, lower bicep, the “tear drop” on the quad, or that squiggly muscle that goes down your arm.  Yes, the squiggly one.

While the questions are diverse, I’m finding myself repeating the same two exercises over and over again:  Chin-ups and deadlifts.  I’m not the only one thinking it either, because another Fitocracy member gave the same answer to a thread comment today:

There isn’t anything mystical about the deadlift or the chin-up.  They won’t lead to world peace, they won’t reduce global famine, and they won’t reverse global warming.  They’re not magic, but I do think Dumbledore would rely heavily on both.

That’s what I want you to do.

Stop worrying about about the best exercise for growing your inner lower bicep, or your medial delt (which doesn’t exist) or the inner portion of your thigh.  Come on; when are we going to realize that this shit looks ridiculous*:

I don’t like proposing barometers of strength, as people get hung up on chasing these numbers.  “I can’t do 10 chin-ups in a row, I can’t go out in public.”  No, that doesn’t make you a horrible person, it just means that you have no business doing bicep curls; there are better exercises for you.

Similarly, if your deadlift is lagging below say, 2.0x body weight for men or 1.5x bodyweight for women, mayyybe you don’t need to be spending as much time doing those innie-outie machines for your thighs, or walking on the treadmill for fat loss.

Focusing on basic strength will take care of that.  Progressive overload isn’t quackery, and it isn’t rocket science.  The evidence that supports it is unequivocal, but this isn’t an exercise selection issue.  This is an education and psychology issue.

Let’s look at Tracy Anderson, who strength coaches love to burn at the stake, which is admittedly pretty damn easy.  She promotes very low-calorie diets, low-weight and high rep training to tone or elongate muscles, and pretty much all of the myths that prevent women from befriending the barbell.

For people that prioritize being skinny(fat) over being healthy, this style of training works.  Don’t eat, wave your arms in circles, and you can win awards for being beautiful.  You may also be diagnosed with osteopenia, but it’s not that serious is it? 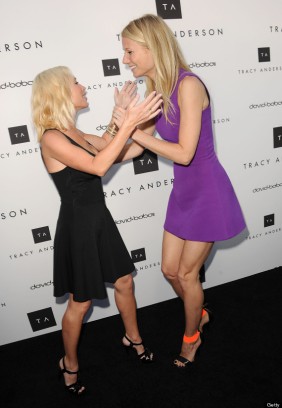 If you’re still romancing the virtues of this training “system” check out these pieces by Fit and Feminist and Mark Fisher.  They have the skinny on trying to be too skinny.

Exercise should be empowering.  It should be about energizing yourself, about feeling better.  That may sound too frou-frou to the train-myself-into-a-hole-because-I’m-such-a-badass crowd, but ya’ll are at the far end of the spectrum.  Take a step back, Mr. #BeastMode.

Developing quality of movement and physical strength is still the best method we have to enhance health and performance.  It doesn’t need to be a sprint towards a squat or bench press record, it needs to be a steady hike towards developing appreciable strength through a variety of exercises.

Train the exercises that you love, but also train the movements that you hate.  If you identify as a runner, good for you.  If you identify as a yogi, good for you.**  My training preference is powerlifting.  Regardless of what we like to do, we’re all humans, and we need to focus on moving well and getting stronger.  The things we lift, lift us.  If your training program leaves you questioning your strength development, I’d bet that you’re missing out on the most important factor of a successful exercise program.

*On it’s own, a single leg glute bridge is a damn good exercise.  Just not the way she’s doing it.

** We’ll attack this one next week, don’t worry.