Numbers are fascinating.  We use statistics to communicate massive quantities of information, and that information is often perceived as important.  I’m not so sure that this is a good thing.

In an age where we begin drowning in data before we’re in school, we don’t respond very well to statistics.  Knowing that a certain percentage of people are overweight, or malnourished, or sedentary does little to change our behavior.  When this information is available but the numbers don’t change, it’s often interpreted by scientists and policy makers as a sign that we need more information.  Information is knowledge, and knowledge gets things done, right?

Last week I gave a presentation at the NYS AHPERD Nassau Zone conference and made a point to touch on the significance of facts and figures.  I included a slide that included obesity and inactivity statistics for New York, and a map of the United States as a whole.  The font was painfully small on purpose, and before my audience could focus on any given font, I showed them an overlay that served as my notes for the slide: 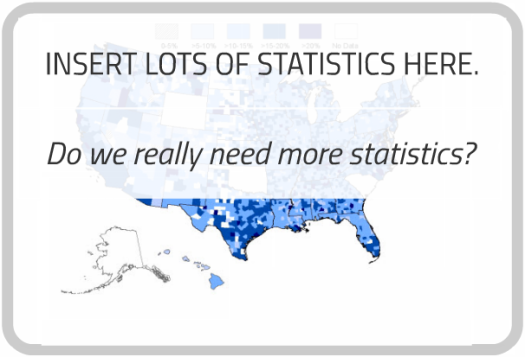 We don’t have a knowledge problem, we have a behavior problem.  Knowledge may certainly drive behaviors, but we must recognize that this isn’t an education issue; It’s an action issue.  Our societal view on education holds to the idea that providing information encourages change.

The focus on statistics can have its place, but when it comes to motivating those around us, I think it fails us.  We don’t need to hear more about obesity rates, tips to save 100 calories in a recipe, or strategies to quickly lose 10lbs.  I’m sure that half of these folks are reading tweets from Men’s Health and Self on their sedentary stairs: 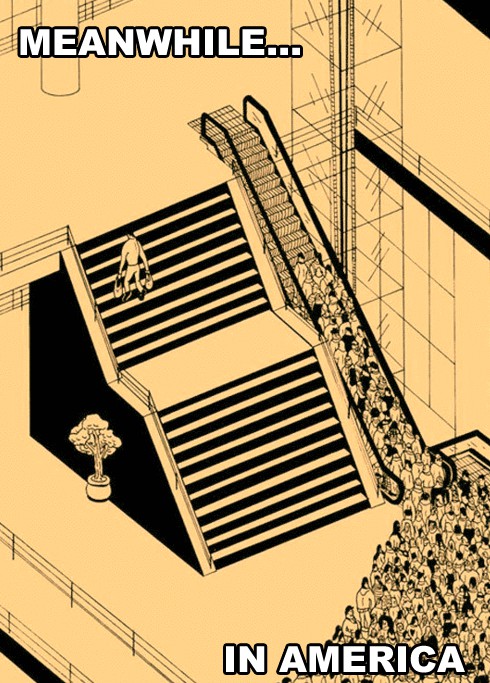 Wow, that’s pretty goddamn cheesey, isn’t it? That’s fine, but I believe that it’s true.  We don’t need solutions to burning the 3,500 calories in a pound of fat.  We need the solutions to enjoy an engaging activity that may or may not burn a pound of fat.  If it were as simple as doing things that burn calories, or eating foods that provide nutritions, we wouldn’t have a health issue.  We would, however, still have a happiness issue.

A large majority of goals that motivate us at the gym are based on health or hotness, and I believe that these look at the bigger picture of happiness.  If we’re chasing 7% body fat, a double bodyweight deadlift, or feeling better to run around with our kids, the end result is one thing; doing things that make us happy.  Why the fuck don’t we start there?

The facts and figures approach works quite well for reinforcing beliefs.  It reinforces the beliefs of those who want positive reinforcement for eating well and being active.  It reinforces to everyone else that they’re wrong.  This helps reinforce deep-seated feelings that they can’t do something, or that it’s not important.  We’re educating ourselves to the point that we’re selectively choosing to ignore information that improve the quality of our lives, and often times save them.

The biggest threat to our lives is our own actions, or inactions.  We spend so much time focusing on the facts and figures from when things go wrong that it becomes increasingly difficult to focus on how we feel when things go well.  The empowerment, self-efficacy, and personal development that come with steady accomplishment are going to go a hell of a lot further than talking about BMI.

Next time you’re faced with a “problem” consider your thought process, or how others are handling the situation.  Are they looking at numbers and statistics, or are they looking at the feelings that are a part of the process?  Considering that difference, remember that the simplest question can be the most important one: “How do you feel?”

One Reply to “Want to Change? You Need More Feelings and Less Facts”