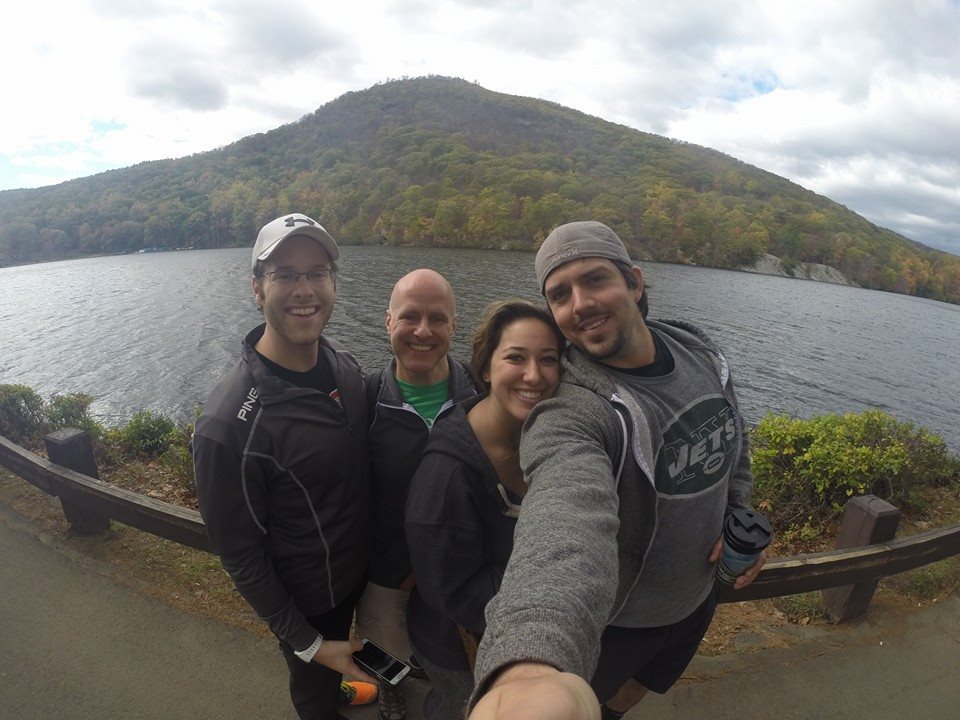 Confession: I really dislike the idea of “getting away.”  It strikes me as escapist, as if what we do every day isn’t good enough*.  What I’m quite fond of is taking a day to get away from your usual environment and refresh your mind and body.

Sunday morning involved taking New York’s A train down to the 42nd street station like usual, but not to visit MFF.  Instead, my girlfriend and I met our friends Kyle (there were actually two of them) for a CircleLine cruise up the Hudson River to Bear Mountain.  We were ready to relax in the fall foliage!

We enjoyed our time with an Oktoberfest feast, then began a walk on the path around the lake.  Everything was calm until the Beast and I spotted some boulders.  Then it was climbing time.

Kyle and I started together, then split to explore different routes.  He went under some rocks, I went over some.  After a few minutes, we cleared a number of fun obstacles.

We hit our high point, and then Kyle noted, “Climbing up is easy, it’s going back down that’s hard.”  He decided to climb a hundred yards or so sideways to get back to a proper path, and I had this short descent back down to Katie and Kwee. 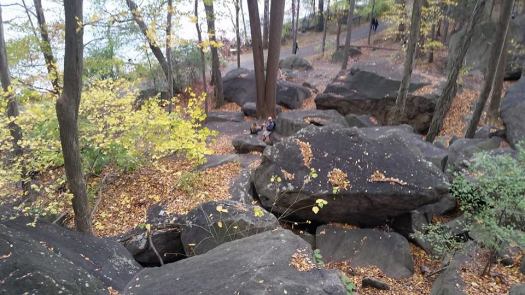 There were a plethora of nooks and crannies along the way, and I couldn’t but help that they would be great places to sneak in a sleeping bag, or for bear cubs to cuddle.

Guys, we need to do more bear crawls.

Not just crawl.  Crawling is easy.  You get on your hands and feet, you move, and that’s the starting point.  Let’s pumpkin spice things up a little bit shall we? I understand that not everyone has boulders waiting for them to conquer, but we can make things a little bit cooler.

Between you and I, it completely makes sense to me that crawling around in a commercial gym doesn’t sound like the most appealing thing to some folks.  There’s the quick, meatheady, “Just get over it and crawl” response, but I like to think we’re more refined than that.  Instead, let me offer you some relatively space efficient options that may remove some of that movement barrier that’s keeping you from crawling.

If the whole thing is completely new to you, I’d suggest starting with this hover crawl variation.  Play with hovers between 1-5 seconds to really start smooth.

From there, let’s go to our step-touch variation, which let’s you practice the landing.  It may sound silly, but taking just a bit of time to make sure you feel comfortable with those hands on the ground.

Considering that space is still a factor, it would be a bit foolish for me to recommend that you tear off across the gym, between the recumbent bikes and ellipticizers.  Let’s keep things tight but progressive by moving… in a circle.  The 360˚ Bear Crawl let’s us get some great movement and save space as well.  It’s a win for everybody.

I’m hoping that spinning in a circle on the floor can work as a space effective crawling variation for those who are limited within their commercial gym, and I understand that for some of us, it’s going to be far too awkward.  Personally, I feel a little empowered by being the slightly different guy at the gym, blowing up balloons between squats, but I digress… Do what you feel comfortable with.

Thing is, maybe you have more space, or you’re ready for some more bear crawl fun.  Don’t worry, I’ve got you covered.  Let me share one of my most favorite bear crawl variations ever.

You’re going to need a little bit of attitude, some space to crawl, and have I mentioned the sled yet?  You’re probably going to want a sled.  If you don’t have access to a Prowler, don’t worry, a metal plate on a rubber floor will be resistance enough.

Strap that sucker to a sprint/agility harness or a weight lifting belt and crawl.  Crawl fast, crawl far, and be prepared for some serious work.  It’s a great way to make that Bear Crawl feel a little bit more performance driven like your bench press and your squat.  If it doesn’t feel very demanding, get some more damn weight and do it again.

If you’re looking for one last batch of ass-kickery, and some questionable fitness fun, you can always bring in the Field Day games with some Bear Crawl Wars.  Remember, the first rule of fitness is to have a ton of fun.

Bear Crawls are an interesting exercise.  There somewhere between awkwardly functional and boringly basic, but they don’t have to be: Strength or space shouldn’t prevent you from crawling, and being physically capable doesn’t mean that you’re too good to get down on the ground.

Incorporating these bear crawl variations to your warm-up, workout, or physical activity should be a great way to bring more authentic movement to your training.  It’s not about doing something ‘right’, but it’s about having as much fun as you can along the way.

Get up, get out, and crawl.  Maybe you’ll meet some cute bears of your own.

* If that’s the case, how can you build a better life.