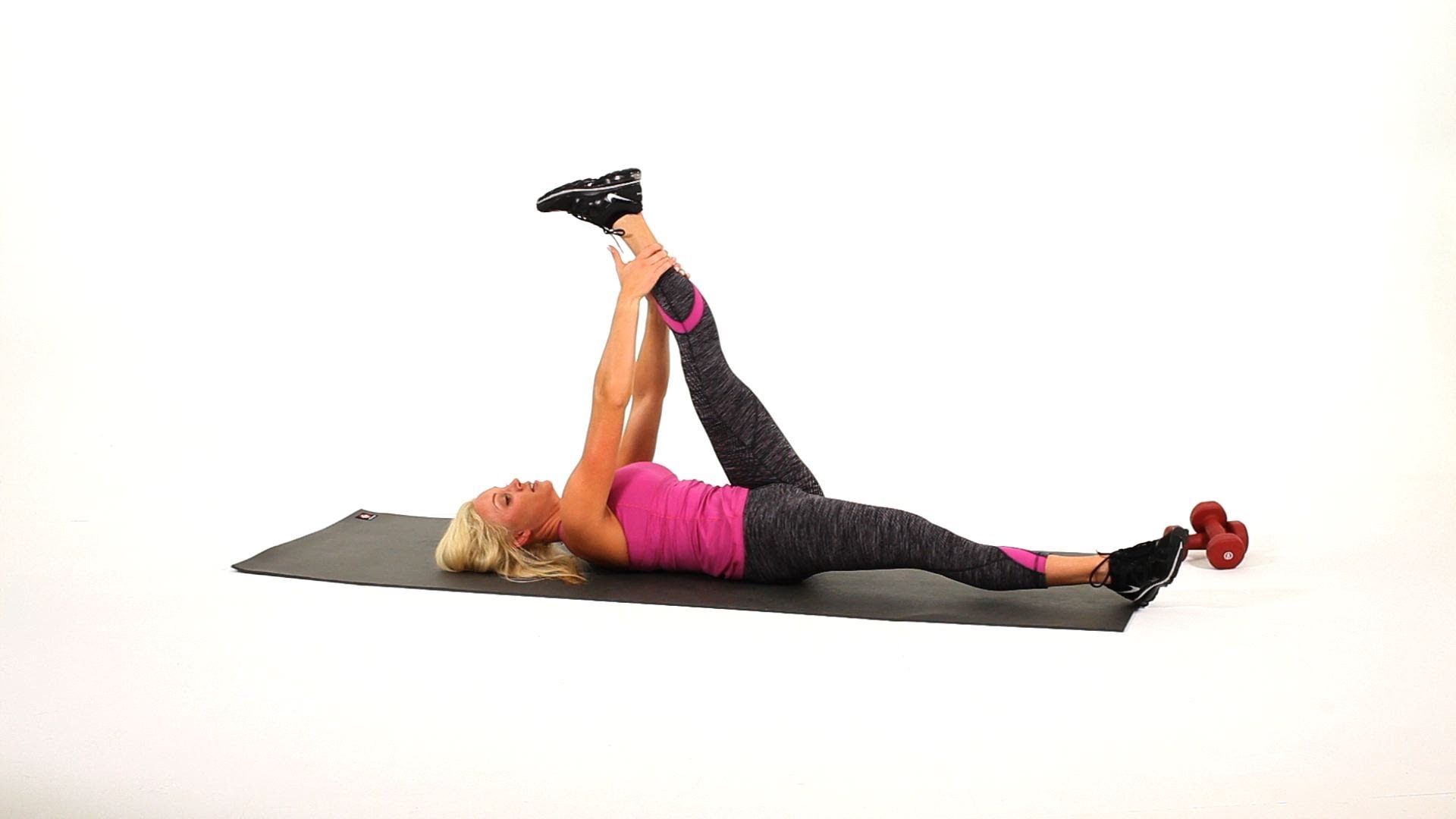 The hamstrings are one of my favorite muscle groups in the body.  I try not to play favorites, but when everyone else is talking about getting 6-pack abs, brick-sized biceps, and cut calves, I can’t help but think, “But what about your hamstrings?” I mean, how cool are these guys? 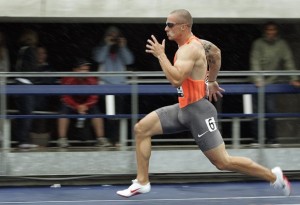 The hamstrings as a group are some of the most fascinating muscles in the body.  They’re muscles that cross two joints, the hip & the knee, meaning that they’re responsible for hip extension and knee flexion.  They do both at the same time, the heels and butt are almost touching.  If they’re doing neither, they can go pretty damn far before stopping.  Since they’ve capable of so much movement, we often find that they feel “tight” when they’re not moving as far as we think they can.  There’s a lot of potential down there: 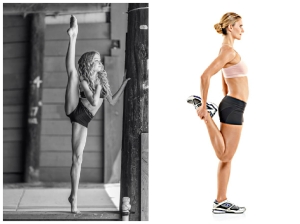 Before we discuss “tight” hamstrings and what that means, let’s delve a little bit deeper into hamstring anatomy, since it’s an important part of understanding what’s going on.  There are three hamstring muscles that originate on the ischial tuberosity, otherwise known as “sitting bones.”  These three muscles insert on the two bones of the lower leg, the tibia and fibula.  It should be noted that of the two heads of the biceps femoris, the short head actually originates on the femur, meaning it’s not actually a two-joint muscle; it only serves in knee flexion. 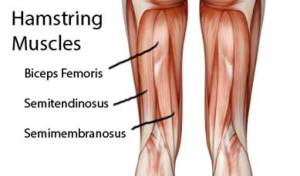 When we talk about the function of the hamstrings, most anatomical learning agrees that hamstrings that shorten lead to a flexed knee an extended hip.  On paper.  With a cadever.  In reality, when we’re moving around like humans do, the hamstrings do a few more things.  My favorite action, they resist extension of the knee.

Let’s look at the action of sprinting, when there are extremely high joint velocities.  The hamstrings resists knee extension.  If your knee extends to quickly, rather than coming down to the ground in preparation for your next step, you’ll hyperextend and snap your patella clean off.  Not the best use of your bodies energy.  While the hamstrings act on the knee to resist knee extension, they also act on the hip to reduce hip flexion.  Rather than letting the entire leg swing up and meet your face, they act to reduce excursion towards that end range position.  Rather than focusing on what hamstrings do, let’s consider what they help us not do.

The hamstrings prevent us from approaching dangerous levels of hip flexion and knee extension.  Once that’s taken care of, they allow us to create the movement of hip extension and knee flexion.  To further simplify things, they often serve several of these functions, all at the same time.  That’s not very simple, is it?

I believe that today’s anatomy lesson is important so that we can better understand why our hamstrings can feel the way that they feel.  More often than not, how hamstrings “feel” is tight as hell.  They feel stiff and achy for some many of us, and that usually results in two things:

Show of hands: Who feels this way?  You’re not alone. These are both situations that I run into on a near-daily basis at MFF, and something that I love addressing with Ninjas.  Often, the solutions that we come to address both of these issues.  Let’s look at feeling a need to stretch first. 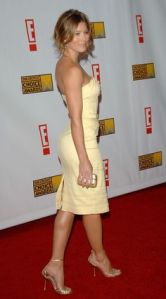 The two best ways to have hamstrings that are constantly craving to be stretched out is to change their position.  We do this most often by addressing the joints adjacent to our hamstrings: Our lower back and our ankles.  Sitting all day lengthens our hamstrings at the hip, while wearing heels carries up the calves to make our hamstrings feel lengthened at the knee.  Together, it’s a stretched out combo that makes our brain say,

“Woah, we’re in a position that’s too long, and we need to cut that shit out ASAP.”

At this point, our hamstrings live in an existential crisis: Turn on a little bit more than normal to get back to a normal length, or relax against the perceived potential of injury.  Guys, your hamstrings hate this situation.  They never want to relax.  They’ll just slowly pull on your knee and hips all day long, making you curse them and their constant “tightness.”  Remember, they’re not actually tight; they just want to relax a little bit.

Now the second issue, of not “feeling” hamstrings the way you’d like to, is often a product of hamstrings that are actually okay feeling long, and of coaching that infers that you’ll naturally feel a hamstring stretch.  Yup, that’s right, sometimes we as coaches can make you think something’s wrong, when it’s not.  Let’s look at this example: 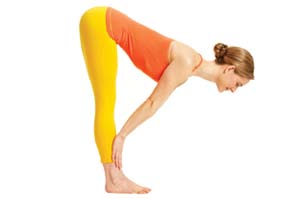 Were I to instruct a person with this degree of comfortable hip flexion to do a bent over row and feel their hamstrings, they might have no connection to that cue.  The necessary position for a well-executed row is far higher than this forward bent, and insinuating that someone will always feel a “stretch” when they’re in this position can lead us to similar sensations with less-than-desirable positions.  I can’t think of any situations where I’d advise rowing in the above position.  I’d much prefer this one:

The sensation that I feel in my hamstrings during that exercise is indeed a stretch, but that doesn’t mean that everyone will feel a stretch there.  I have a feeling that the ability to move through a greater range of motion happens to make it more challenging to ‘feel’ that particular move in your hammies.  Don’t think that feeling a stretch is integral for executing the movement.  The position is more important, and understanding the sensations that are felt there should take priority.

My prediction is that with a shorter hamstring that feels ‘tighter’, we can use that ‘tightness’ as a reference point during many exercises, and that sensation of stretch or tightness informs us of where we are in space. If the hamstrings aren’t pulling back on the pelvis, it gets tricky because rather than feeling a hamstring stretch, you might not ‘feel’ anything. If that’s normally the case, as it often can be, a better focus point is on finding the desirable positions, then seeking to memorize how they feel.

When positioned well, we can create stiffness that we learn from, and becomes replicable.  This should create more desirable alignment throughout a movement, rather than focusing on a sensation that may not be achieving during a particular exercise.

The constant search for a hamstring “stretch” while exercising may be futile.  If you’re used to larger ranges of motion, this can drive you totally insane as you seek the stretch.  When we inform movement as coaches, remember that “finding a stretch” is far different from “feeling active hamstrings,” or any of the external cues in our toolboxes.

If you’re filled with rage about hamstring “tightness” take a minute to think: Are you constantly wearing lifted heels, and are long portions of your day spent sitting?  We can often change one or the other.  Yes, I know you have a desk job that you don’t plan on quitting, and it’s always possible to create a training program that offsets our time outside of the gym.

The hamstrings are a muscle group that can move through an incredible range of motion, and they are the happiest when they feel like they’re in control of as much of that range as much as possible.  If yours feel tight, ask yourself if you’re moving through a comfortable range of motion and if you’re feeling specific sensations while you’re moving.  There’s a good chance that what we think is uncomfortable is what’s desirable, and vice versa.

2 Replies to “Are Your Hamstrings *Really* Tight? Let’s Talk About It”