“I’ll give you one to get your lungs burning.”  This is what Glynn said to me in Ashland, New Hampshire, when I asked him about a scenic bike ride nearby.  Katie and I spent last weekend exploring bits of the lakes region, and we considered a two wheeled spin.  The chilly weather meant that we drove instead of rode, but the option for a challenging bike ride with this backdrop is one I’ll take next year. 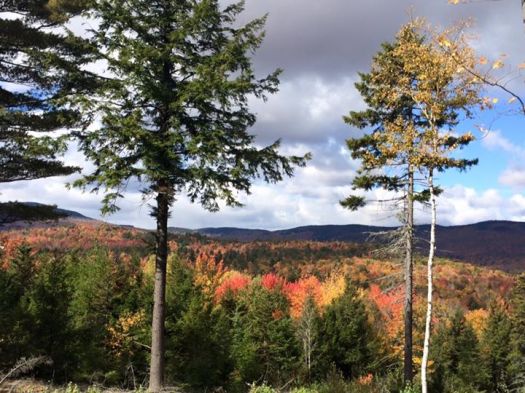 While Glynn’s mountain adventure was appealed to my inner athlete, I found myself considering what  “burning lungs” mean for most of us, aside from activities or goals.  Boom, that’s when I saw it more clearly.

You can’t serve two masters by training for both athletics and aesthetics.

Let me remind you of my sub-community in the the fitness industry.  It is is heavily driven by the field of strength and conditioning, where performance in the gym is correlated to performance outside of the gym.  We like undulating periodization, post-activation potentiation, self myofascial release.  These are the people that talk about cardiac output instead of aerobic exercise.  We a group filled with brilliant, progressive minds, and I believe that we’re behind the times.

We have the most cutting edge exercise science in the world at our finger tips, and we’re working in the psychological dark ages.  There are two things major considerations we’re missing here.  The first one is a simple point of focus.  Where we focus our energy we succeed. If we’re focusing on many aspects of success, we’re likely to be marginally successful with many of them, rather than measurably successful with one.

Simply put, by focusing on athletic performance goals while simultaneously focusing on our aesthetics, we’re too likely to get distracted or bounced off track.  It comes down to budgeting willpower.  If we spend 10 days counting every gram of protein put into our bodies, we skip a workout.  If we train to the utmost of our abilities and are too tired to cook dinner, we send Domino’s a pizza emoji, and then it’s being made moments later.🍕

Rather than complete separate parts of the puzzle at the same time, I much prefer we work on one corner at a time before moving on to the next one.  It’s a long-term play that builds success, often with less hands-on coaching.  It serves the basic human needs of autonomy, and when success begets success, we develop competence as well.

Often, this means using similar strategies to those people who are involved in world-class athletics or aesthetics, but consider this: What if they are predisposed to be world-class? I’m not talking about Destiny, I’m talking about genetics: They picked better parents than you.  That doesn’t mean there’s anything wrong with your parents it just means that you have a little more work to do. (Hi, Mom!)

When we focus on athletics and aesthetics at the same time, we’re fighting ourselves.  We don’t become world-class versions of ourselves, we become mediocre and frustrated.  It’s more than okay to have multiple goals, but there’s a catch when pursuing two at the same time:

For athletics, adaptation is the goal.  A classic test of improvement in fitness is a measuring heart rate in response to a set level of work on a treadmill or stationary bike.  It seeks to answer the question, “Can you do the same amount of mechanical work with less metabolic work?”  This is the opposite of what we want for aesthetics.

For aesthetics, adaptation is the enemy.  We work at something, decide it’s getting easier, then move on.  It’s one of the reasons that classes at MFF run on a 4 week cycle.  Long enough to mentally adapt, but short enough that we’re never physically adapted to them.  It’s time for some exercise physiology and evolutionary biology rolled into one. 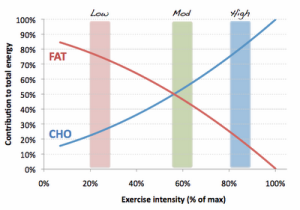 Why might this happen? It’s commonly accepted that a gram of fat contains 9 calories of energy, while a gram of carbs contains 4 calories.  Carbohydrate as a fuel source provides more immediate energy than fat, but is more metabolically demanding.  So, our body developed a strategy to conserve energy at low intensities, while maintaining enough reserve to work at high intensities when necessary.

Do you know what else developed this ability? Only every gas electric hybrid car on the market.

While our species is successful due to our Prius-like performance, I’ve yet to meet someone who wants to look like a Prius.  When we seek Corvette level performance while trying the nutritional equivalent of “plugging in,” we’re bound to run out of gas very quickly. At the same time, when we try to maximize our miles, we won’t be zipping along at the same time.  If only we’ve found a metaphorical Tesla; It hasn’t happened yet!

While the quest to become a Tesla is noble, it’s one that’s just not likely to happen.  Our two goals quickly change from close to conflicted, and rather than improving at both, we’re physically less likely to achieve either. As the physical fatigue sets in, our minds become flustered.  ‘Why can’t I do both,” we ask ourselves. Try as you may, it’s because our physiology didn’t design itself for this. We can’t beat our biology.

If training for aesthetic goals and athletic goals at the same time isn’t all that efficient, then what are we to do? I’m glad you asked, for it’s simple.  We train one, then we train the other.

I love the idea of having a focus point, and this is perfect for balance.  Pick the goal that feels more appropriate to you, and train that one first.  It’s that simple.  As a point of interest, I spent the summer working on my athletic goals of becoming better at mountain biking, and now that winter is coming, I’ll turn my focus towards the aesthetic goals of putting on muscle.  I’ll loosely break this into half of the year; please note that I don’t mean for this to be a 2-week-at-a-time plan.

Ultimately, we’re looking at balancing our short term goals with our long-term personal evolution. Remember, the endgame for most of us is not to have a world-class physique, or world-class performance, but to become world-class versions of ourselves. We can best do that by channeling our passion for self-improvement with training that takes us there.  Alternating our focus between aesthetic improvements and athletic performance helps us strike a balance between mental and physical energy to get it done.

Reminder: There are no mandatory exercises.
Thanks so much for this post @mffclubhouse, and thanks @nedfedbed
One of the things that I've been focused on recently is choosing exercises that use more easily accessible equipment.
We got my niece a balance bike for her first birthday.
Are you familiar with the advice to "diversify your portfolio"?
Check out this 2-Point Bent-Over Supported Row.
Loading Comments...
Comment
×
%d bloggers like this: