Behold, the bent over row. Perhaps one of the most full-body rowing variations, the bent over row allows us to use our hips and abs in addition to all of our other rowing muscles. There’s a lot going on in this move. Here’s a picture from Strength Training Anatomy: 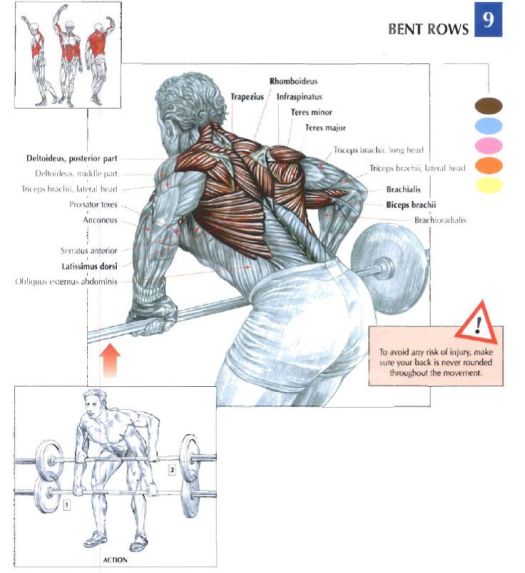 The biggest benefit of rowing is that it helps our pulling strength and upper back musculature, and using the bent over row adds a postural control challenge at the hips, including the glutes and hamstrings.

Many of us who have tried doing bent over rows are aware of something else, too: That lower back that sits between the upper back and hips, and can sometimes feel like it’s doing all of the work while we hinge.

Today, I’m going to share with you an exercise pairing that I wrote into our new class cycle at MFF that I’ve found to be helpful with guiding our awareness back to our hamstrings. Pun intended.

Influenced by Janda’s Lower Cross Syndrome, I like to think of the hamstrings as “Lazy” muscles, ones that will quickly shirk their supportive responsibilities in this group project. The hamstrings are that kid that barely wants to do anything, but when they make the decision to participate, they’re an all-star. The lower back is the opposite, eager to do all of the work, but quick to fatigue and become frustrated. The upcoming exercise combo seeks to restore some balance to this group project.

Here’s your anatomy picture for the day: 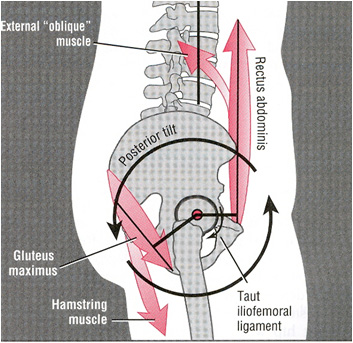 Rather than scold the hamstrings for not participating, we’re going to give them some praise before they even get started. I like to think of this as proprioceptive foreplay.  Build awareness of the muscles that you want to use, then use that awareness to drive increased awareness of an often irritating exercise.

Nerdy fitness types know this as internal focus, which we typically move away from thanks to the work of Gabriele Wulf and Nick Winkelman. That’s perfectly alright; we’re not doing this for the NFL Combine, we’re doing this to be more comfortable during our bent over row!

Here’s a demonstration of the hamstring bridge hold:

This doesn’t look like much, and that’s because after the initial set up there is minimal movement. We’re setting our heels on the floor, then we’re creating an aggressive posterior pelvic tilt, or Sad-Dog as we call it at MFF. Once you’re there, you breathe.

Now let’s take it to standing:

When we prepare to perform the bent over row, I like to start with a tall plank. In that plank position, can you recreate that tension in your hamstrings and in your obliques? If not, you do not pass “Go” and you do not collect $200. Find that first. Once you find it, then you hinge. Earn that hinge! 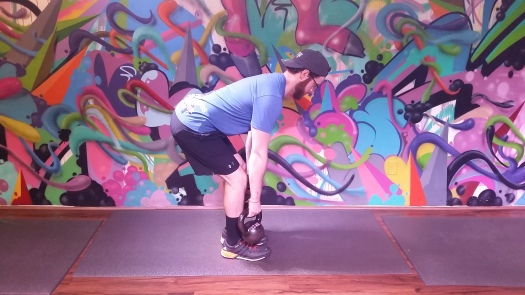 Return those ‘bells to their starting position. That was one rep. Guess what? We’re going to use the same question for every rep of this set. Every. Single. One. If you don’t, it’s far too easy for that overeager lower back to take over, and those hamstrings realize that they can relax. Why bother priming them with their own exercise if we’re not going to use them when we row?

Here’s a video of the whole thing in action:

We’ll be experiencing this combo at MFF for the next four weeks, and it’s one of the easiest combinations to recreate on your own. All you need is space to lay down, and freeweights to row. They can be kettlebells, dumbbells, a barbell, a box of puppies: Anything ya want.

When practicing, I’d recommend using 3-5 full exhales on the hamstring bridge hold to really “set” that pelvis position and prime the hamstrings, then follow it with a set of rows that’s long enough to challenge that tension. That’s likely 8-10 reps for the row. If you prefer counting time over reps, then 30 seconds of each ought to do the trick.

If bent over rows get the best of your lower back before your upper back, give this hamstring bridge hold a try. I bet that after a few breaths of that kinesthetic foreplay, you’ll feel more secure and stronger in that hinge, allowing you to make that row even better.

As always, share your feedback, I’d love to learn from you!

10 Replies to “This Will Make You Better: Hamstring Bridge Hold to Bent Over Row Combo”