“But it’s not supposed to be fun,” my Uncle John said to me.  We were chatting about a bit of health and fitness at my brother’s wedding this weekend.  (Congrats, Will and Jackie!)

I had shared the idea that we’re the most successful when we consider what we’re doing “fun.” I realized that while diet and exercise is considered many things, fun is rarely one of them.  I’m interested in changing that.

A recent trend has caught my attention, and it’s of world-class athletes talking about how much fun they’re having while practicing and performing in their sports.  Success leaves clues, so let’s follow these gluten-free breadcrumbs, shall we? 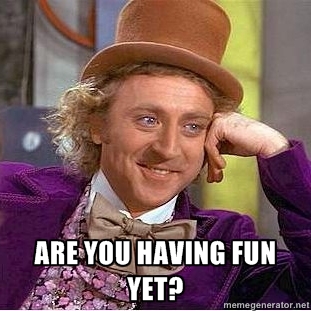 Katie and I arrived in NYC in time for the women’s vault finals, which 19-year old American gymnast Simone Biles won.  The competition included 41-year-old gymnast Oksana Chusovitna.  In modern times, being 41 is middle age.  In gymnastics, 41 is ancient.  During the commentary for the event, Chusovitna was quoted as saying that she’s still competitive because gymnastics is still fun for her.  Even during moments like this:

Chusovitna has been competing in the Olympics for 5 years longer than Simone Biles has been alive.  And still, she does it because it’s fun for her.

In a special covering the back-to-back men’s all-around champ, Kōhei Uchimura, he noted that he enjoys teaching children gymnastics because it reminds him of how much fun the sport can be.  This comes from a man who admittedly struggled when he began, and now many consider this man to be the greatest gymnast of all time.

Can you see a trend here?

At the most elite levels, the top performers are still having fun.  Let’s learn from them.

When it comes to diet and exercise, more often than not we are let down by our own optimism.  We bite off more than we can chew.  We seek rapid results, but fail to lay a foundation of solid habits.  We lack appreciation for the slow-and-steady tortoise compared to the hare.

What resonates with you?

2 Replies to “Monday Motivation: Are You Having Fun?”