I’m feeling pretty chipper this morning, despite waking up at 5:30am.  As soon as I woke up, I registered for a summer class at Nassau Community College that fits in perfectly with my summer schedule at Adelphi Univeristy.  You may say summer break, but I see it as an extra semester during which I can fill my noggin with more important information.  Plus, I’m not much of a beach guy anyway, I just burn and stay pale;  The Irish blood beat out the Sicilian blood.

Now, on to some more important things.  On this past Saturday, I played in a concert with the South Shore Symphony Orchestra, and we played (among other things) Ravel’s arrangement of Mussorgsky’s Pictures at an Exhibition.  It’s one of my favorite pieces, and it was a blast to play.  After the performance, I went to the International Delight Cafe, located in Rockville Center.  On my count, they have 61 flavors of ice cream, which makes decision making very difficult, especially in a tuxedo. Vanilla?  No, I’ll have the Stracciatella, thank you very much.

Now, you may be thinking, Harold, how are you going to get ab-y for the summer if you’re going out for ice cream?!  Truth is, if I do that frequently, I won’t.  However, considering I play in maybe four concerts a year, and might go to International after those concerts, I think I can get away with it.  What’s my point?  If you’re eating clean the majority of the time, you can afford to pig out every once in a while.  If you’re trying to improve your body composition and/or lose some weight, allowing for the occasional cheat meal can help keep you motivated, and prevent that ‘I-need-to-eat-everything-in-sight’ feeling of being in a caloric deficit for too long.

Now, while the concert and ice cream was on Saturday night, on Saturday morning I went to the Long Island Long Cycle Championship.  The Long Cycle is the clean and jerk performed with kettlebells.  At the event, men and women completed 10 minute sets, trying to complete as many reps as possible in that time frame.  Each repetition is counted by the judges, and I saw a number of athletes receive ‘no count’ calls after less-than-satisfactory reps.  The men competed in the two handed long cycle, while women competed in the one handed event.

Kettlebells are becoming increasingly more popular for fitness and performance training, but the kettlebell sport applications are noticeably different.  The movement is much more fluid, and is designed to conserve energy.  This allows one to complete more reps, and ultimately rank higher in Kettlebell Sport.  This ranking system is akin to a belt system in martial arts, and was explained to me by competitor Bernardo Santamaria, who I spoke with after his set.  Bernardo explained to me that once you complete a given number of reps, you have achieved that rank, and ‘graduate’ to the next bell size.  I knew about the ranking system, but never thought about it that way, and it certainly sounds cool; it’s progression built into a training system.  In addition to the ranking system, Berdardo explained that although 4 athletes were completing sets at the same time, they weren’t necessarily competing against each other.  The athletes weight class, ‘bell size, and experience were all factors, and it was instead like the athletes were competing against themselves to set PR’s or achieve different ranks.

Kettlebell sport doesn’t seem to have much of a following on Long Island, other than in the gym that organized the event.  There are plenty of facilities that use kettlebells as a fitness tool, but not to train for Girevoy Sport, as the activity is commonly referred to.  Despite that, I noticed that there were teams from all across the country that came out to Long Island.  Bernardo was from Houston, Texas, and he remarked, “I can’t believe I traveled all this way just for 10 minutes.”  I noticed seeing teams from Austin, Washington DC, Columbus, Ohio, and even from California.  Bernardo pointed out a number of different athletes to me, and I checked out some videos and rankings when I got home; I was certainly in the presence of kettlebell greatness on Saturday morning.  Unfortunately, I missed the StrongSport competition at the end, which was a one handed long cycle for 4 minutes, with a minimum bell size of 32k.  To make up for that, and to give you an example of what I saw, check out this video of Andy Fitting from last year.  Andy was at the event, but I never got to see him swing.

I went to the event to learn more about the sport, and after seeing it live and in person, I’m thinking a little more about getting involved.  Kettlebells are one of the best conditioning tools on the planet, and it would be nice to train and compete in something other than trying to out drive my brother when we play golf.

Moving on, I have an article that I think that everyone should read.  If you’re on Facebook, you may have seen me recommend it, but if not you can check it out HERE.  Martin Rooney discusses the castration of men in the gym, and explains how you can stop training like a little girl and start getting bigger, faster, stronger, and leaner.  To give you some examples, maybe you should squat, deadlift, dip, and sprint.  This article is great, and Martin makes things basic and understandable.

Recently I’ve been trying to push the message that in addition to training well, you need to eat well and recover well; one or two without the other will leave you with sub-par results.  Following that, check out THIS article that was sent to me from my friend Cameron, that explains how sleep deprivation sabotages dieting.  If you’re trying to lose weight, but burning both ends of the candle, you may want to rethink what you’re doing.

The last link I’m going to share with you today is from Ben Bruno’s most recent Good Reads for the Week.  This series was started by Bret Contreras, and Ben took over the role of compiling…well, good reads for the week!  I’ve been using this series to catch up on a lot of the reading I don’t regularly get to do during the week, so Ben’s work comes in very handy for someone busy like myself.  I’ll regularly check the blogs of Tony Gentilcore, Charlie Weingroff, and Eric Cressey, but it’s hard to review many more; Ben does the work for me!  I’m not sure how it happened, I made the list this week!  In fact, three of my posts are on there!  Wow…I am humbled.  I may be the least qualified of all of the authors listed, but I find it extremely motivating to learn more, write more, and motivate as many people as possible.  Ben included my training goals in that post, so I certainly won’t be slacking off in the gym anytime soon.  Again, THIS is the link.

As you know, I think that people get the most out of learning compound exercises, and training them heavy.  Last night, I was on the phone with a friend from Lehigh University, explaining the program that I wrote for him.  Max will be using an upper/lower split, and while he trains his upper body regularly, his lower body is “pretty weak”.  Max’s training days focus on either trap bar deadlifts or front squats, with ample single leg and conditioning work involved in well.  I’m looking forward to seeing Max get stronger as times goes on, and to see how the improvement in his lower body strength contributes to his overall strength and physique.

This leads me to an important point about lower body training; do it! Most people don’t do enough of it, and it’s extremely important.  Too many people say that they run to make their legs strong, and it’s simply not true.  Running won’t make your legs strong, even if you’re running uphill at a full sprint.  (Hillsprints are pretty awesome though, and you should do them.)  I don’t consider myself either big or strong, but I’m consider a ‘leg guy’ at my gym.  It’s not that a 4 plate deadlift is heavy; odds are you know that it’s not.  Unfortunately, not many people push themselves when it comes to training their legs, and they undermine their progress.  Do me a favor, and ask yourself the following question: “Do I train my lower body hard enough?”  If you didn’t come immediately to the answer ‘Yes’, then you need to train harder.  You need to pull more, you need to squat more, you need to lunge more.  While you’re doing that, you need to do them heavier, and hopefully banish even the thought of using a leg extension or seated leg curl.  If you’re wondering what some good goals to train for are, two times body weight seems to be a universally accepted starting point for strength in the squat and deadlift.  For me, that would be 370lbs, which nobody would really consider to be that heavy.  Read: That’s not heavy.  If you want to consider 300lbs heavy, then you have to be doing awesome things like Ben Bruno:

Alright, that should wrap it up for this morning.  I’m finishing this up after class, and I’ve already made a Charlie Sheen reference, given you some good links, and included two videos of really strong people.  Hopefully, this will inspire you to have a killer workout and step up your training, regardless of if that is squatting for the first time, or setting a PR.  I hope that you have as much energy as I do today, and that it carries you through the week to Friday.  I’ll bring you some more content before then, and I’ll try to happy then.  Maybe it’s from the tigers.  Look how much energy they have! 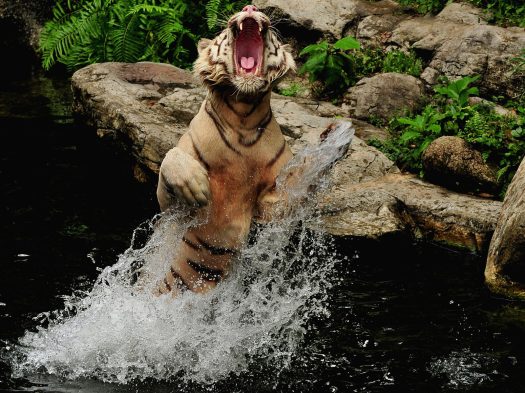