A few weeks ago, I noticed a young fellow working out near me in the fitness center on campus.  During my workout, I couldn’t help but glance at him while he worked out, and I noticed something; he was doing only ab exercises.  Out of honest curiosity, I asked the question, “Dude, are you only doing abs today?”  In my most naive of moments, I hoped to hear that I missed him clean, do chin-ups, and military press.  Unfortunately, his response went a little like this:  “Yea bro, I’m trying to get really cut up for summer this year;  I’m going to do abz and cardio now, and then come back in a few hours and do some shoulders.”  I swear to you, that’s what he said.  Let me take a few liberties with it this time: “Yea bro, I was talking to my buddy who’s like 165lbs and jacked, and he said he saw this program in Muscle and Fiction; Arnold used to use it to get ready for the Olympia.”  To give you some back ground, this guy might be 175lbs, and about 20-25% body fat; long way from looking like Arnold.  After he told me this, I started my explanation of cleaning up his diet, using heavy compound lifts, and trying stabilization based core work.  In the past month or so, it appears that he hasn’t changed a thing, and he looks exactly the same.  Go figure.

Unfortunately, as summer approaches us people all across the country who are using the same strategy to try to get their beach body.  A few nights ago I was exhausted after I returned from the gym, and I wanted to get to bed as soon as possible.  While eating some of my mom’s chili and a great shake, I checked some emails and refreshed my Facebook page.  That’s when it happened: I noticed the unfortune string of statuses that detailed peoples less-productive workout plans, including ‘Back and Bi’s’, ‘Traps and Calves’, and ‘Abs and Cardio’.  While I certainly commend these folks for getting into the gym in the first place, they’re just like that aforementioned charchter; using less-efficient training splits to get that summer six pack.

In a recent e-mail, Mike Boyle explained that the ‘table push-away’ is the best ab exercise, and he’s 100% correct.  You want abs?  Table push-away.  While Coach Boyle was being slightly facetious, he’s definitely right.  Cutting body fat is simply related to what you eat, and as a culture we’re eating too much of the wrong foods, and not enough of the right foods.  If you want a six pack, don’t add extra crunches and cardio to your week; add some protein, cut some carbs, and stop pounding 12-pack’s on your Thursday-Monday weekends. 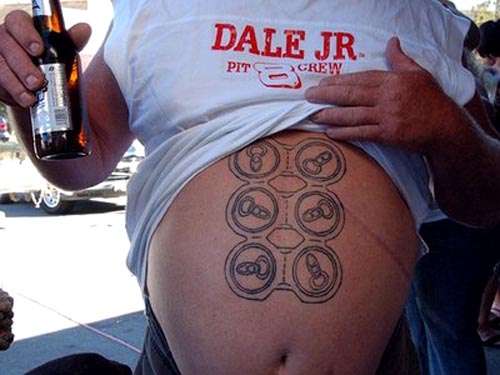 Most people use direct ab work, lots of steady state cardio, and simple caloric restriction to try to cut bodyfat, but it’s a flawed system.  Doing a thousand crunches a day does little for you, other than giving your abs more endurance and destroying the discs in your spine.  Lots of steady state cardio doesn’t burn as many calories as you think, and it doesn’t do anything for your metabolism.  I’d even pick Zumba over the treadmill, at least in Zumba you move around a little bit more.  Worst of all, just cutting out calories seems to set you up for failure.  From my experience, I notice that when most people cut calories out of their diet, they start with fats and proteins.  After all, eating fat makes you fat, and protein makes you bulky, right?  NO!  It’s those 100 calorie packs and sodas that you’re eating!  The processed sugar in the foods causes your insulin levels to spike, which in turn causes you to store fat to use later as energy.  Since you’re eating 3 snacks a day and have a Snapple sponsorship, your body never gets to use that fat for energy; it just stores more and more.  Instead of cutting overall calories, cut out the bad calories.  If you look at a simple peanut butter and jelly sandwich, think of what’s processed.  Is it the peanut butter made with peanuts and salt, or is it the bread that has unbleached enriched wheat flour?  What about the jelly that has then natural sugars occuring in blueberries and strawberries, plus high fructose corn syrup.  If you want to make your PB&J healthier, then have PB on a spoon.  It’s not the overall quantity of calories that you’re eating, it’s the quality of calories that you’re eating.

Not sure about that?  I’ll give you a test.  For a week, try to eat only unprocessed meats, fruits, and vegetables.  You might love your Big Macs, but instead try a grilled or broiled steak with your favorite vegetables.  You’ll eat a greater volume of food, and fill up on more nutrients and less calories.  It’s how we’re supposed to eat, not the processed whole grain crackers pitched as health foods, and special heart healthy spreads that are marketed by medical and health ‘gurus’.  Eat some steak, spinach, eggplant, and eggs,  then we’ll talk about the weight you’ve lost and how you feel better.

Since you’re now going to eat healthier to be healthier and look better, let’s talk about how you should be training for it.  The odds that I would recommend an abs/shoulder day are less likely than someone actually nailing the bracket this year.  (I’m assuming everyone is wrong by this point.)  Instead, we’re sticking with the same things I always say; train heavy compound movements through a full range of motion, and do them well.  Learning proper technique is important, so you don’t get hurt and reap the benefits of each exercise.  Additionally, learning proper technique will allow you to move more weight, which will in turn allow you to get stronger, leaner, and awesomer.  Yes, I just said that.

There is definitely a time and place for direct core work, but you really should start with the basic compound lifts.  Deadlift, chin, push-up, overhead press.  If you’ve never front squatted, you should front squat.  Your obliques will be shot for a few days after, and you may start to listen to this whole ‘you need to squat and deadlift’ thing.  Now, we come to the question of what’s the best way to train your abs?  Unfortunately, there really isn’t one right answer.  There are some pretty good answers, but nobody is positive.  However, there are two ways that I’d recommend you go about doing it.

If you’re starting out, isometric core exercises should be a staple.  They’re boring, they’re hard, and they work really well. If you’re not sure what I mean by isometric core exercises, use this simple definition:  The muscles between the shoulders and the hips resist movement of the spine, while yours limbs are stationary/ in motion.  The absolute simplest version is the plank.  You don’t move, but you feel yours abs working.  That’s exactly what we want!  The three basic execises to use are the plank, the side plank, and the paloff press.  If you want to see some more exercise examples right now, check out THIS article from Mike Robertson, 21st Century Core Training.

Now, if you’re used to some of the isometric core training, then I’d suggest you try some more advanced compound exercises.  If you’re only used to bilateral training, try some unilateral exercises.  If you’re used to unilateral exercises, try some asymmetrically loaded unilateral exercises.  You want examples, don’t you. If you’re a proficient front squatter, try a split squat, or reverse lunge.  I’ve switched to using a clean grip reverse lunge for the next weeks, and it’s probably the most abdominal intensive lower body exercise I’ve done so far.    If you pass of your seated dumbbell overhead press for a military press, then stand up and use a barbell.  Your abs will feel it.  If you’re used to that, try to perform a single arms dumbbell press.  Again, your abs will feel it.  By using variations of these staple exercises this way, you can train your abdominals in a functional capacity, which in turn can make your main lifts stronger.  It’s all about effectiveness and efficiency.

The split squat is one of my favorite exercises, and I think everyone should learn it in a basic pattern.  Once you’re proficient in the basic split squat, try to hold a single dumbbell/kettlebell in the hand of your back leg.  To get a better idea, here’s an older video of me showing 3 different variations of this:

Incorporating asymmetrical loads into your training allows you to increase the stabilization requirements of your abdominal muscles, and get some additional volume in for your legs.  You may want to incorporate these onto some finishers at the end of a workout, after you’ve hit your big lifts.  To give you an example, I used a ‘walking lunge’ finisher a few weeks ago, that involved lunges and a kettlebell.  I did 8 reps of lunges with the kettlebell in each position, for each hand.  8 reps x 2 hands x 3 hand positions = 48 reps.  Each set lasted about 3 minutes, and after 3 sets both my legs and my abs were fried.  It’s not something that I do that frequently, but on occasion it’s pretty damn effective.

With that, I’m off to the gym for a lower body workout.  I’ll be deadlifting against bands, doing reverse lunges with a front squat grip, pairing front squats and roll outs, and completing a finisher with farmers walks and whatever else is available.  According to most people, there aren’t any abdominal exercises in there.  According to some, the roll outs count.  In my mind, every exercise is an ab exercise to one extent or another, and that’s the way it’s supposed to be.

One Reply to “Abz & Cardio”