A few days ago, a fellow Health & Physical Education major at Adelphi sent me a video from the YouTube channel “TwinMuscleWorkout“, which as you can guess from the title is hosted by two muscular twins who workout.  As a fun point of interest, I have a twin brother, but we are seldom assumed to be twins.  Anyways, he sent me the video to see what my response was, and because in other videos the brothers say some rather funny things.  Unfortunately, in this one they’re discussing the deleterious effects of my beloved deadlift, and there’s nothing funny about that to me.  Let me just say, I got pissed when I first watched it.  I’ve shared it below, but let me first caution about some of the laungage in the video.  I try to keep things clean, but there are a fair amount of F-bombs in this video.  Fair warning:

What the hell did you just say?  When I first watched this video, I was so appalled by what I heard that I watched it again.  Then a third time.  After my initial rage began to wear off, I took several deep breaths before deciding that instead of arrogantly saying, “No, you’re definitely wrong here,”  I’d scramble up the information to support the statement of “No, you’re definitely wrong here.”

Before the pwnage begins, I’ll be the devil’s advocate for a second.  There are defintely times when heavy deadlifting is not appropriate, and can be dangerous.  If you have piss-poor movement quality, have traumatic or recurring injuries, or have a history of pain or dysfunction, then it might not be in your best interest to aggressively pull.  However, in the grand scheme of things, the list of reasons you should not deadlift is much shorter than the list of reasons you should deadlift.  First though, what the hell is a deadlift?

The deadlift is a hip hinge pattern.  It’s not bending forward, but rather pushing the hips back behind the feet.  The most concise explanation I’ve seen is from James “Smitty” Smith: “The hip hinge, generally speaking, is any flexion / extension movement originating at the hips where there is a posterior weight shift.”  (Check out his Learning the Hip Hinge article.)  Hingeing properly is essential to safe deadlifting; if you’re lifting with poor technique, then the twins are probably right.

As an example, compare the two pictures below and the resulting sheer force on the spine.  The picture on the left is of a flexed lumbar spine, demonstrating 9.5x more sheer force than on the neutral spine.  If your spine is flexed under load, then as the brothers say, ” Over time, I guarantee you, you will end up snapping some shit up.” 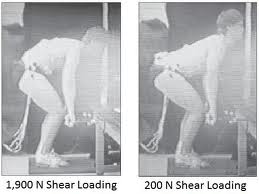 “Over time…”  That’s important, because plenty of things happen over time.  Wolff’s Law states that bone in a healthy person will adapt to the loads it is placed under, and thatif loading on a particular bone increases, the bone will remodel itself over time to become stronger to resist that sort of loading.  Now, to see Wolff’s Law in action:

Granhed et al. (1987) found that powerlifters were able to sustain 4,824 lbs of compressive loading during the deadlift. Theoretically this load is too high for the spine to handle. According to the authors, “the study showed that intensive training will increase the bone mineral content (BMC) to an extent that the spine can tolerate extraordinary loads.”

Over time, properly performing a hip hinge pattern will strengthen the spine, not weaken it.  When done properly, it’s probably one of the best exercises you can do, and offers some of the highest neuromuscular, muskuloskeletal, and metabolic adaptations, in a single lift.   Deadlifting helps to address an issue that’s all too common in our mirror driven society; the absence of the ass.  We’re so overly focused on the anterior chain of pecs, abs, and quads, that we forget all about the backside.  In an article titled “Maintain the squat, Train the Deadlift“, the Gandalfian Gray Cook offers the following words:

“You can’t damage joints doing proper dead lifting. Muscles are the major stress agent of the dead
lift, whereas ankles, knees, hips and back can’t help but are stressed a little when squatting. The dead lift
is all about muscular control and drive.”

With information from some heavy hitters, I don’t think I need to continue, but I’d like to encourage you to make an informed decision on what’s appropriate for you.  Hopefully now the question isn’t should I deadlift, but how should I deadlift.  Recent research from Swinton et al compared the kinematics and kinetics of the deadlift performed with a straight bar versus a hex-bar (trap bar).

The design of the hexagonal barbell significantly altered the resistance moment at the joints analyzed (p < 0.05), resulting in lower peak moments at the lumbar spine, hip, and ankle (p < 0.05) and an increased peak moment at the knee (p < 0.05). Maximum peak power values of 4,388 ± 713 and 4,872 ± 636 W were obtained for the SBD and HBD, respectively (p < 0.05). Across the submaximal loads, significantly greater peak force, peak velocity and peak power values were produced during the HBD compared to during the SBD (p < 0.05). The results demonstrate that the choice of barbell used to perform the deadlift has a significant effect on a range of kinematic and kinetic variables. The enhanced mechanical stimulus obtained with the hexagonal barbell suggests that in general the HBD is a more effective exercise than the SBD.

This research suggests that the trap-bar deadlift provides greater peak force, peak velocity, and peak power values when compared to a straight bar, and creates less stress at the hip joint.  In the strength/functional training community, we typically hear about the trap-bar deadlift being referred to as a ‘beginner’ deadlift, or a safer deadlift.  While some coaches (such as Jason Ferruggia) will dispute that, most seem to understand or accept an easier set-up and learning curve.  In Functional Training for Sports Mike Boyle expounds on the ability of the trap bar to more evenly split the load between the hip extensors and the knee extensors, which effectively shifts forces away from the lumbar spine.  The recent Swinton research corroborates this.

Below, you’ll see research cited in The Contreras Files: Volume II which compares spinal forces during deadlifting.  The column of interest here is the one which details Sheer Loading (Anterior/Posterior) data.  When comparing numbers, you’ll see that the sumo deadlift has lower measures of sheer force than the conventional deadlift (1,530N vs. 1,643N), which are significantly lower than the sheer forces associated with the rounded back deadlift (1,900N).

Pull with a competent hip hinge (Posterior weight shift, neutral spine) and you’ll be set up for success.  Doing anything with poor form is going to get you hurt; You’re smart enough not to drive your car on the wrong side of the road, so don’t deadlift with a rounded back.  Clean up your technique, then go to town with your pulls.

Pull heavy.  Get stronger.  Maintain solid technique with each rep.  Be smart and sensible with your programming.  Do a little bit of reading, find good sources of information, and please for the love of all that is important in the world, try not to be swayed by well-intentioned but ill-informed YouTube videos.  Instead, try to learn from dudes like Gray Cook:

“The hip hinge is the most powerful lift you have. It evokes core stability, hip mobility, glute development, postural maintenance and overall attention to body alignment. I can’t think of a reason why you wouldn’t dead lift with almost every population interested in elevating their fitness level.”

For some more sensible information about the deadlift, check out some of the links below:

StrongLifts’ “How to Deadlift: The Definitive Guide to Mastering Technique”

“Much Ado About Deadlifting” – Tony Gentilcore

“Are You Ignorant When It Comes To Deadlifting?” – Mark Rippetoe

“Get it Right: The Deadlift” – Tim Henriques

Finally, here’s a sweet technique video from Smitty of Diesel Strength and Conditioning.  It’s well worth the watch.  Thanks for reading this much, and good luck with your pulling.

5 Replies to ““Are Deadlifts Dangerous and or Overrated Exercise???””