Nike Frees, Reebox RealFlex, New Balance Minimus, Inov8s, Vibram Five Fingers; the list of minimalist training shoes is very long.  The fitness industry has been seeing a ‘back-to-basics’ trend as of late, and footwear is along for the ride.  It seems that every week or so another company is creating a shoe designed to enhance the training experience by reducing support and cushioning.  The trend is reaching the masses, and I woke this morning to find an article on the Huffington Post “Healthy Living” main page, titled:

Minimalist Running: To Shoe or Not to Shoe?

It’s a good read; I’ll wait while you check it out.  In the article, Dr. Dines and Dr. Positano sucintly touch upon the why behind the trend:

The concept behind barefoot and minimalist running is basically the same. By running with a more “natural” forefoot or midfoot-strike pattern, the muscles in the foot and ankle build up, and the forces generated by the foot hitting the pavement are better dispersed. This, as is argued by the touters of the style, saves habitual runners from injuries such as stress fractures and tendon problems. Minimalist runners use shoes that have minimal cushion and support, but do protect the foot from debris on the ground.

While there is limited science behind the barefoot/minimalist trend, there is science backing it up.  The authors cite THIS study, which shows that folks that run barefoot are more likely to fore-foot strike, and that “even on hard surfaces, barefoot runners who fore-foot strike generate smaller collision forces than shod rear-foot strikers.”  Prior to the invention of the modern running shoe in the 70’s, which offered plenty of support and cushioning, it’s likely that “fore-foot- and mid-foot-strike gaits were probably more common.”

The authors of the article (not the journal study) discuss the prevalence of injuries that occur when recreational runners switch from the footwear they habitually use to the minimalist footwear.  They mention that injury rate data is lacking, but I believe they missed THIS study which showed that “those who habitually rear-foot strike had approximately twice the rate of repetitive stress injuries than individuals who habitually forefoot strike”…”One hypothesis, which requires further research, is that the absence of a marked impact peak in the ground reaction force during a forefoot strike compared to a rearfoot strike may contribute to lower rates of injuries in habitual forefoot strikers.”

We should pay attention to the word ‘habitual’ in these articles and studies.  When we think of habit, we’re thinking of something that we’ve done for a while, right?  It’s important to note that, because it seems that many of the injuries occur when people are making a change, and are not habitually barefoot or in minimalist shoes.  The article authors quoted Dr. A. Holly Johnson, an orthopedic surgeon from Massachusetts General Hospital in Boston, as saying:

“Typically injuries occur when the runner doesn’t adequately alter their running style to the forefoot strike pattern and continues to heel strike in the minimalist shoe.”  They point to two case studies: “In one case a marathoner tried out a minimalist pair of running shoes and ran over five miles on three consecutive days. He developed irritation of his Achilles tendon that knocked him out of running for four months. In another instance, an experienced runner started training for a marathon in minimalist sneakers for the first time and developed a stress fracture in her heel after two months of training.”

You sir, are an idiot.

It seems that even experienced runners underestimate the importance of slowly adjusting training volume and intensity to accommodate the necessary changes in both techniqueand tissue remodeling that will occur as a result of the change in training strategy.  I provided a similar response to an old high school classmate who asked about Vibrams when he saw them in one of my Facebook default pictures: 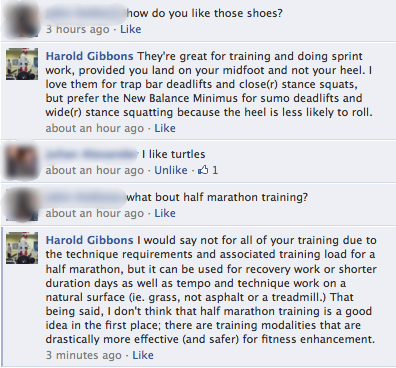 In the Facebook screen shot from above, I actually advised against using minimalist shoes (In that case, the Vibram Five Fingers) for high(er) volume endurance running.  After years of shod/supported running, the structure and function of your foot may have changed so much that it won’t be able to return to it’s “natural” state.  Isn’t that the point of barefoot/minimalist running anyway?

When we hear about pain or injuries that result from running in general, I find it to be overwhelmingly true that people bite off more than they can chew.  As it turns out, most folks have aerobic fitness levels that are far above their muscular strength and endurance, and as a result run themselves into the ground; heel first.  Thanks to the support offered in the modern shoe, we can get on the pavement and cruise along with horrible technique.  The shoe absorbs the force, and we continue on pain free.  Over time, this chronic bad technique builds up, and we see overuse injuries due to the impact forces we experience with poor technique.  Interestingly, it seems we’d rather deal with overuse injuries than spend a little time learning how to move properly, and using pain as an indicator of when to stop.

I’ve heard physical therapist Gray Cook discuss this in several podcasts, articles, and lectures, and I think it’s huge.  We’re overly interested in quantity over quality, and forgo safe practices for what we assume to be more beneficial.  Considering this, I’m not convinced that the type of footwear used by runners is as important as the technique used while running.  If youmust choose between improving technique or buying minimalist shoes, it’s probably in your best interest to overhaul technique.  Once that’s accomplished, slowly move towards the least supportive shoes you can handle.  For some people, this may all the way down to the Vibram Five Fingers, but that won’t be the case for most.  (At least not to run in.)  There’s a huge spread between something as unstructured as the VFF and something as structured as customized orthotics; it’s up to you to decide what you can comfortably wear and train in, and what’s the most conducive to your goals.

When it comes to the tortoise and the hare, the story needs to be rewritten based on modern exercise science; the hare’s style of interval training is going to beat the hell out of the tortoise’s long, slow cardio.  That being said, if you’re going to emulate our carapaced companion, I’d suggest you learn how to forefoot strike, and strive to wear footwear supportive of this technique.

4 Replies to “Slow And Steady, Before You Race”