In the ten seconds that it takes you to read these opening lines, know that it’s taken me at least 20 minutes to write them.  I’ve only written two posts in the past two weeks, so I feel a little out of place with my writing.  To help brush the dust off the gears, I have a collection of thoughts for you today, and then several topics I’d like to address this week as the creative juices start flowing.

The issues that I want to address today are simple; it’s about making, maintaining, and improving on healthy habits.  I’m specifically thinking about that maintaining part, because it seems to be more complex than beginning or stopping something.  It’s rather easy to say, “I’m going to start doing X now” or “I’m done with that because it’s bad for me.”  If maintaining a habit was easier, than we wouldn’t see so many yo-yo dieters, 90 day home workout systems, or Lindsay Lohan.

Let’s face the reality that there isn’t a single strategy or concept that is universally applicable.  Some people function better by making massive changes to their lifestyle, and the drastic difference is so exciting that it enables them to follow this new lifestyle.  Others however are so resistant to change that they begin to struggle as soon as change is discerned.  It probably won’t come as a surprise when I say: Find what works for you.

Personally, I’m a little split between those two extremes.  In some cases, I can make a rapid change and it’s not a big deal; in others, it takes a long time.  I’ll use my lifting schedule as an example; I’m pretty on top of exactly when I train; it’s on my Google calendar, and I refuse to miss workouts.  I’m resistant to changing the day or time of my workouts, but I don’t have a problem changing what I do during the workouts.  As long as I cover the designated movements I want in a given day, then I’m set.  I’m about to make that a little bit harder on myself by overhauling my training split, so expect to hear about that this week.

In the past several days, I’ve spoken with several people about creating and maintaining positive habits, and about training schedules in particular.  There’s a wide spread of abilities and fitness levels, as well as schedules and habits.  I’m a fan of examples, so let me share some of those with you:

My current mentor teacher for student teaching wakes up early in the morning to go for 4-10 mile runs, depending on the day.  She’s on the streets running at 4:30am.  When she first told me this, I thought it to be a little bit crazy, but I realized that it works perfectly for her busy day.  (I had to lift at 6am last Thursday, and again this week; waking up at 5am was a little hard for me, but I’ll admit I felt like I was running on rocket fuel the entire day.)

I’ve been working with a new client for the past 3 weeks that has been making leaps and bounds in his performance in the gym.  He’s been taking care of soft tissue and mobility work, follows all of the programming that I’ve given him for his ‘solo sessions’, and has been staying active outside of the gym as well.  He’s been getting a lot stronger, and has fallen into the feed-forward mechanism of success; the more progress he sees, the harder he works.  He’s made a big change and is seeing great progress, and the most beneficial aspect of that is that he feels better, both physically and mentally.

My last example of hard work and a change in routine is of a local high school senior who used to spend upwards of 20 hours a week working out.  20 hours is no exaggeration; we’re talking like 3 hours of bicep curls.  It’s taken me a while to real him in, but I eventually put my foot down on the stupid stuff and got Marc on the straight and narrow.  He’s an in season sprinter, lifting twice per week, and is at the gym for less than 4 ours a week.  That’s 20% of the time, but he’s far more productive.  He’ll take care of self myofascial release and mobility, then hit big bang-for-your-buck movements; deadlifts, chin-ups, push-ups, goblet squats.  In a relatively short time, his movement quality has improved, and he’s gotten much stronger.  Here are pictures of a 315lb sumo deadlift and 365lb trap bar deadlift. Not bad for several months of ‘real’ training.  Marc is sprinting for a local DII program next year, and I have a feeling he’s going to do very well. 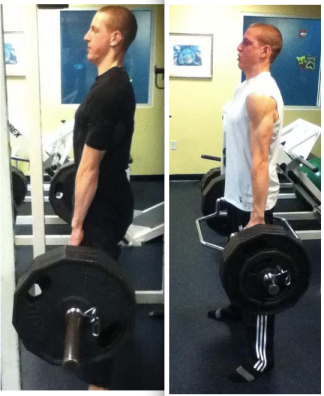 Between these three examples you someone who maintains a vigorous training schedule, someone who feels better by adding more exercise, and someone who moves and performs better by exercising less.  All are great examples of what can happen when you follow a system.  Regardless of what you’re doing, make sure that it works for you.

2 Replies to “Don’t Call It A Comeback”