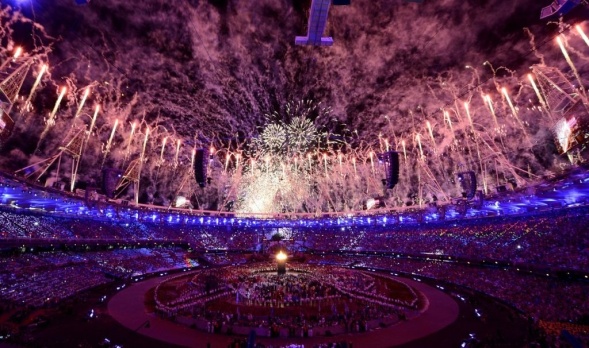 The Opening Ceremonies presentation, Isles of Wonder, provided a beautiful evolution of the British Isles from past to present.  Danny Boyle presented a “living movie” that was intimate and engaging. I appreciate how he demonstrated the passion of the people, as  it set the emotional stage for the Olympic games.

I appreciate the outstanding athletic achievements of all of the athletes competing in the games, from those who set World records in medal events, to those who set personal bests without moving on from prelims.  The superstar athletes are impressive; I love the Lochte vs. Phelps battle for USA swimming,  Kim Rhode is calming during the skeet shooting, and I want to see Misty May-Treanor and Kerri Walsh continue their undefeated Olympic career.  Good for them, but I like the under dogs.

Every time the NBC announcers talk about an underdog, I’m immediately a fan. I can tell you I’m rooting for Oscar Pistorius in the 400m sprint, and people not named Bolt in the 100m and 200m.  I like the upsets, the lesser known athletes, the underdogs.  When a tale is told about an up-and-coming teenage athlete, I’m rooting for them, so they can go home to friends and family, to curfews and prom, with their gold medal.  Why?

Athletes are excited when they win.  It’s impressive to watch, isn’t it?  However, when the underdogs win, or the athletes that don’t have commercial deals and endorsement contracts, there seems to be a different type of joy.  The athletes that are genuinely impressed with that they did; there’s a competitive satisfaction, and incredulous disbelieve.  It’s impressive.

The world remembers the great moments of competition:  The closing moments of a swimming relay, the dismount of a gymnast.  Why don’t remember the specifics of the situation, but how we felt when it was happening; the emotions unify us more than the competition itself.  Those are emotions that aren’t limited just to Olympic athletes, but to everyone.  You feel them, I feel them, our friends and family feel them.  Everyone that’s worked hard towards a physical goal has experienced a similar sense of accomplishment and determination.  In this sense, I think we all experience the Olympic Spirit.

Maybe you don’t believe me, and that’s okay, because it’s not that serious.  How about this:

Very few of us are Olympians, but we can all benefit from the Olympic Spirit: