I’m enjoying a Saturday evening of watching the Olympics, reading snippets of research from The Journal of Strength and Conditioning Resarch, and watching Harry Potter and the Order of the Phoenix.  Behold, one of the most irritating characters ever in the history of modern literature: 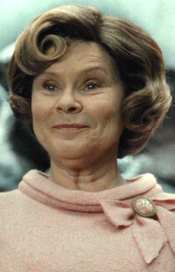 For those of you who aren’t Potterheads, this is Dolores Umbridge, bureaucrat, professor, and High Inquisitor at Hogwarts. Umbridge, while perhaps a talented witch, interfered with the lives of students and faculty alike, and was both cruel and condescending in her interactions.  Not surprisingly, pretty much everyone, including yours truly, absolutely despise her.  Here is an example of her sucking at life:

Are you as furious as I am?  Seriously, few characters infuriate me as much as she does, both because she’s raving mad, but also because she reminds me of some teachers I’ve had in the past.  In the scene above, you see Harry explaining something that is clearly observed as true, but it being disputed by an educator who is in a position of power.

A good deal of tyranny goes by the name of protection.

In the Harry Potter Universe, Umbridge’s thirst for power is ultimately her downfall.  Luckily, you don’t have to worry about the Second Wizarding War, but you likely will have to deal with someone who has a heavily vested interest in being right.  Just as Harry proclaims that practical knowledge is different from dueling in a practice setting, I’ve had similar discussions with professors about myths and methodologies in exercise science.  What have I learned?

Whatever your topic of study may be, read more research.  Question what people are telling you, regardless of their qualifications or accolades.  Read more research.  I’ve spent the past few weeks doing more reading, and recently it has been almost entirely research, from sources like The Journal of Strength and Conditioning Research.

Ya know what I like about research?  You’re not learning an entire system or being sold a product.  It’s a specific treatment with a specific population, it may or may not have worked, and it may or may not be applicable with who you’re working with.  Maybe you’ll read something that seems like you’ll never use it.  (Yesterday, I read about VO2 max testing for surfers.)  Other studies may give you ideas for tweaking your programs to provide the most up-to-date, scientifically supported programming possible.

When it comes to learning, remember to step out into the night and pursue that flighty temptress, education.  Isn’t that how it’s supposed to go?