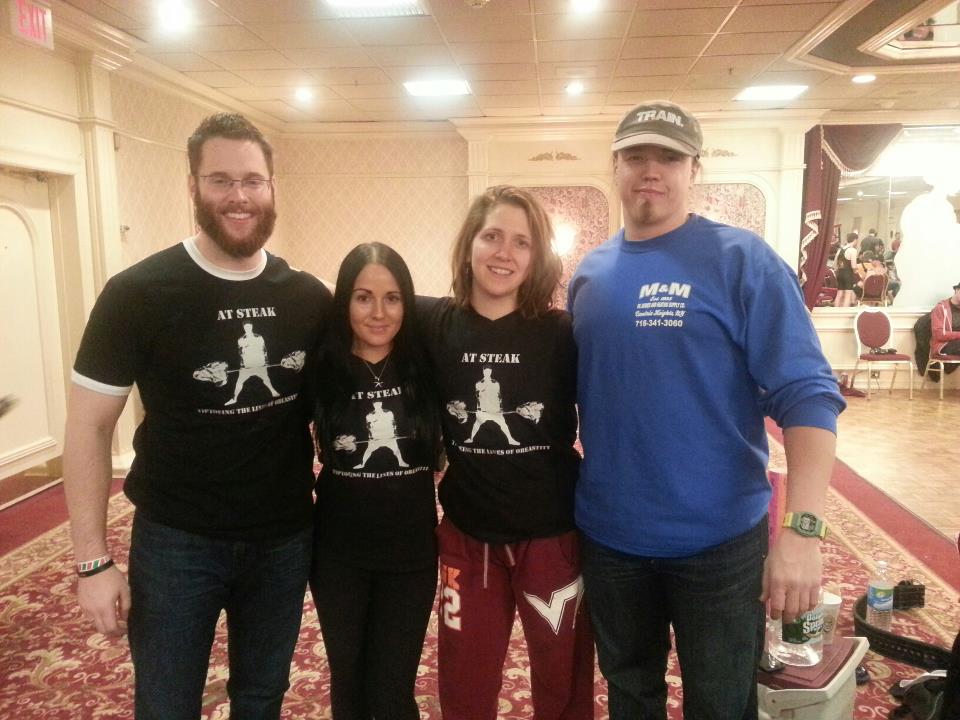 Last weekend I competed in my first competition since playing lacrosse in 11th grade.  I’ve been exercising regularly since then, but the most competitive thing I’ve done is putting on stretchy jean shorts and running a Warrior Dash as a sexy lumberjack.  Other than that, I’ll casually play golf, volleyball, and see how much I can push on the Prowler.  This weekend, that changed, when I competed in my first powerlifting meet.

The event was the 2013 Revolution Powerlifting Syndicate North American & New Jersey State Championships.  It was organized by  Gene Rychlak of Rychlak Power Systems, who happens to be the only man to squat and bench press 1,000lbs.  The meet had a record high 115 lifters this year, and we assembled over the weekend at a Ramada Inn adjacent to the airport to test our mettle.

In the long chains of e-mails sent since first meeting Juliet Gotthard and Erika Hurst in September, the idea of competing in a power lifting meet had been thrown around.  Erika had already competed one, but Juliet and I were total n00bs.  After much contemplation and procrastination, we decided to compete.  Juliet created a logo, and team “At Steak” was born: 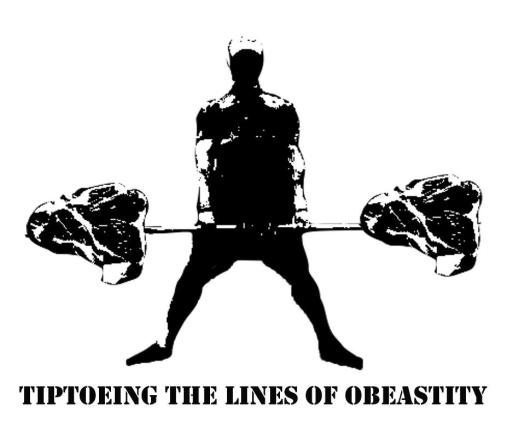 We’ve been training as consistently as possible since mid-October, with some slight disturbances since that damn Hurricane Sandy came through.  Still, preparing for the meet was pretty awesome.

There were times when I hated it, but with three weeks out the only thing in the world I wanted to do was set a PR.  I tell you, I dreamed of squat racks.  Stick to the plan, buddy.  Fortunately, I was training with my friend and certified coach Kyle Yberg, who was also preparing for this meet.  This way, we were able to provide feedback, lift offs, and spots, and keep each other focused on the prize.

Kyle and I drove to Newark the day before the meet so we could weigh in then crash at Juliet’s.  After stepping off the scale, plans were made to meet Juliet at an all-you-can-eat buffet buffet called Ichiumi in Edison.  I believe we all made it to our fourth full round before we started to fill up.  I should also say that Kyle and Juliet out ate me.  I’m not cut out for competitive eating, but I’ll gladly take all challengers.

We rose early on Saturday morning because Juliet had to weigh in, and Kyle and I had to make it to the rules orientation, which can be summarized as:

As long as didn’t dump a bar on a missed squat and you listened to the judges, you were ready for a good weekend.  Lifting began at 9:30am, so those of us squatting in the first flight began warming up between 8:45-9am.  Kyle and I were in the first flight, so that’s when we got moving and grooving.  That’s also the time that I decided I’m definitely doing another meet.

The first time at anything is always pretty awkward, and I’m excited to have already picked out another meet.  I’m going to do my best to encourage/demand that Kyle, Erika, and Juliet are also there, and I know that Tony Bonvecchio, will be there throwing down some awesome numbers.  My biggest fear going into this meet was being the ‘new guy’, but it was an absolute blast.  If you’re interested, we’re doing the Spring Iron Frenzy in Westbury, Long Island.  You should join us.

Kyle put up some solid numbers as well, with a 375lb squat, a 270lb bench press, and a 460lb deadlift, totaling 1,105lbs at 220lbs.  We had the same total,  isn’t that cute?! We’ll be training pretty hard in the next ten weeks to see where our training goes.   Here are videos of Kyle’s best squat, bench press, and deadlift:

Right before the first flight of deadlifts began we were joined by Erika Hurst of HurstStrength.com.  Erika is a bundle of fun, sarcasm, and judgement, which is why she and I get along so well.  Erika helped call numbers for deadlifts, and we had a good time getting nerdy about exercise technique and strategies.  She’s also a bigger mobility nerd than I am, and Juliet snapped this impromptu picture of the three of us going to town on tissue quality: 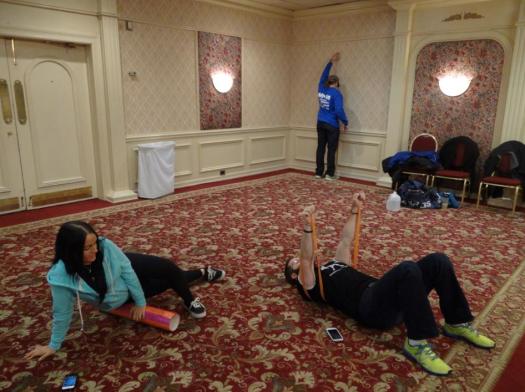 The meet really gave us all a mental kick in the butt, and Erika wrote up Simple Tips to Have a Better and Smarter Workout.  It’s an awesome post, and you should read it.  One of the most important things that you can do is to properly warm-up, and Erika and I attempted to do our first demo video, which we’ll call Mobility in a Box, which is a stationary mobility drill you can do practically anywhere.  Check it out:

Don’t worry, there are more to come, and we’ll be less awkward, with less background noise.

That video was taken on Sunday, when the lightweight men (181lb class and down) and women lifted.  This included our very own Juliet Gotthardt lifted.  If you click on this, you’ll find her full recap of her meet results, which included a 145lb squat, a 105lb bench, and a 255 deadlift to go 505lbs at 148, and 9/9 for all of her lifts.  Here is some footage of her 3rd attempts:

Juliet’s 255lb deadlift probably looked so damn easy because she picked up 200lb me before she started warming up for her attempt.  Sure, I’m lighter, but look at their faces.  They didn’t expect me to be so heavy:

Once Juliet wrapped up her lift, the overall exhaustion of the weekend caught up to us.  Erika and her boyfriend returned to Conneticut, and Juliet, Kyle and I went to an On the Border near Rutgers where we all stuffed our faces for the 3rd evening in a row.  We were joined by my friends Ali and Ryan, who were probably scared by our attempts to gorge on as much food as possible.

On Monday, there were several group emails of, “Wait, now we’re back in the real world?!”  It’s a different place.  In powerlifting land, we talked about setting personal bests, about lifting heavy things, and about eating to support the lifting of heavy things.  The real world is full of lack-luster training and vanity, and it was an absolute pleasure to be surrounded by like minded individuals who were physically and physically strong.  I’ll paraphrase what Erika said in her post:

Training hard, heavy and SMART along with properly fueling yourself with high quality foods can lead to awesome body composition and quality of life.