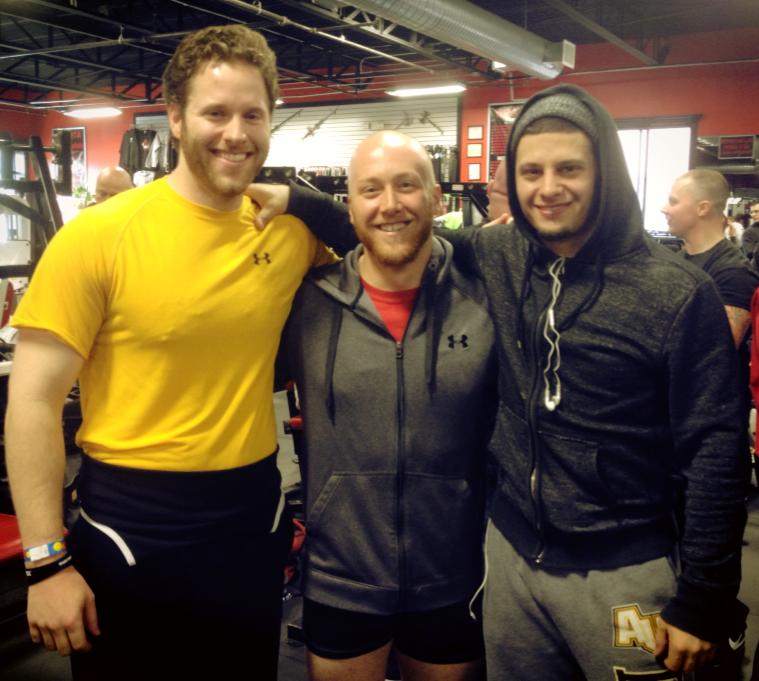 I haven’t stopped thinking about squats in the last week.  It might be an addiction.

On April 13th, I competed in my second powerlifting meet, the APF New York State Spring Iron Frenzy, which was held at Sparta Gym in Westbury, New York.  If you’d like the full meet results, you can check them out HERE.

Sometime between my first and second squats at the RPS meet, I decided that I needed to do another meet, and had 10 weeks of training going into this one.  In those ten weeks, I put 40lbs on my total.  Yippee!  While I was excited about setting some PR’s, I’m even more excited that I was able to see a ton of friends on both sides of the platform.  Here I am with Tony and Dan during squat warmups: 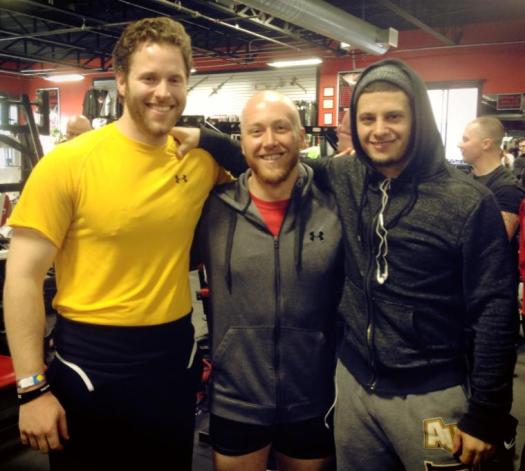 We had a blasty-blast during the day, and by “blasty-blast”, I mean the day was 14+ hours long and stupid.  I arrived with my friend Ben at 10am, and didn’t take my first squat until around 12:30pm.  There was a 5 hour gap between my last squat and first bench press.  My last deadlift hit the floor at 11:40pm.  A good number of lifters rolled out after they realized how long the day was going to be.  Seriously, that’s ridiculous.

I have my full meet warm-up information on Fitocracy, and here’s a run down of my attempts:

Tony gave me sa-weet depth calls, because I was squatting deeper than I needed to.  Thanks!  My friend Greg was able to get a picture of me grinding through that last squat.

There was a long break after squatting, which included watching world-record holder Dave Hoff compete in bench only.  Dave missed his attempts, but here’s a video of his 1,005lb 3rd attempt:

My attempts look pretty lame after seeing that, and I’m a little disappointed that I missed my last attempt.  They were:

The judges were definitely on top of butts on benches, and I was a little hesitant with leg drive.  It could be because it looked like an exorcism:

Tony and I traded lift offs while we benched, and Scot Mendelson and Dave Hoff traded as head judges.  Pretty sweet.

After benching, I laid down to take a nap.  Well, I tried to, but it’s hard to do that at a powerlifting meet that’s held at a commercial gym.  Around 11pm, it was deadlift time.  I had a second wind and tried to get myself together.  Deadlifting has always been my favorite lift:

After warming up, my attempts were:

Apparently my spacial awareness goes down when I’m tired, and I wasn’t lined up properly on my last deadlift attempt.  The bar speed looks good on video, but the bar is very obviously lopsided.

Here’s a little video I put together with the attempts that I have video of:

I went 7/9 and learned a bit more about lifting.  What I enjoyed even more than setting some PR’s was seeing my friends who competed get fired up to lift.  Three of the fellas were competing in their first meet!

In addition to some solid lifting, I saw some great people.   Juliet came out from New Jerz and Erika came down from Connecticut to drop a holler, my long-time friend and neighbor Steve helped me warm-up for my bench presses and deadlifts, and there were heaps of Adelphi classmates who rolled out.  Elyse, Dave, Jordan, Kerry, Corey, Nick, as well as  Justin and  Nick from Oceanside all were there, and packed the place with energy.  It was absolutely awesome.

The list of things that wasn’t awesome is short: Time management was poor and there were judging discrepancies on squat depth and bench touches.  Other than that, I love powerlifting.

I’m planning on taking the summer to hone technique and build my lifts.  I’ll be including the big lifts in my training, and including a bit more variety than I’ve had since January.  I’ve already checked Powerlifting Watch and found the RPS Long Island Insurrection meet on November 16th.