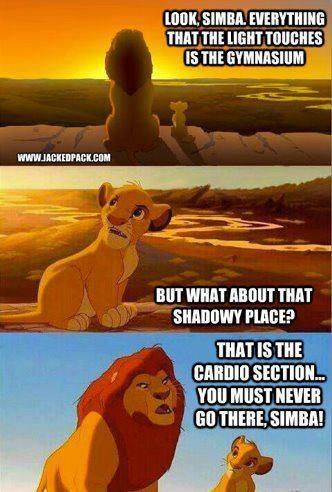 Holding out a jump rope, Paul asked:”Hey, Billy, where do these go?”  After a brief pause, Bill replied: “Put them on the bike.”  I glanced over at the bike, then back at Bill Rom.  “Cardio equipment goes together, right?”  I nodded in agreement, and we returned to coaching our athletes.  What’s the key point of this story?

There is one bike.  It’s primary purpose is to hold jump ropes.  Here’s a picture of the gym we were in: 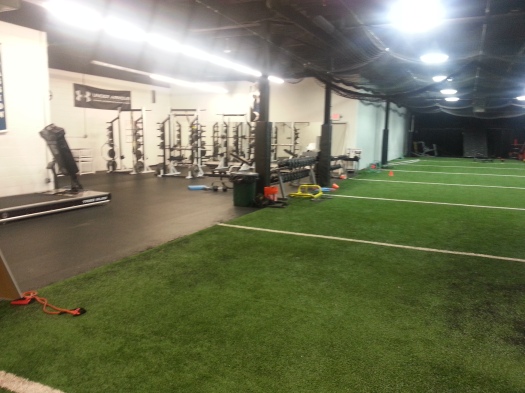 If you were to ask me what type of “cardio equipment” there is at Prospect Sports, I’d tell you bikes and jump ropes.  Those are the pieces of equipment that serve the specific purpose of elevating heart rate, which is why they get the least use.  The barbells, dumbbells, cable columns, medicine balls, plyo boxes, and variety of sleds get far more use than the bike and jump ropes ever will.  The reason for this is because our goal isn’t to elevate heart rates or burn calories, it’s to create a meaningful change.

Generic exercise programs look at calories as X’s and Y’s.  It becomes a simple formula of consuming and burning calories, and people learn to eat less high calorie food and elliptisize until the machine tells them they burned X number of calories.  This is why the math you did in 3rd grade was important.

Thanks to America’s failing education of math and sciences, not many students are inspired to look behind the simple math and get into the finer points of physiology.  When you learn about how the body responds to exercise, you realize it’s far more complex than Weight Watchers or your heart-rate monitor want you to belief.  We’re not successful at  “Making things as simple as possible, but not simpler.”

The majority of mainstream health and fitness focuses on energy balance and steady state cardio, it makes anyone who recommends other wise sound like a complete jerk.

When I drop the Mufasa on most folks, it’s not taken seriously.  They’ve learned to base fitness on dedicated cardio training.  You have to run, swim, bike, or otherwise sweat for long periods of time.  If sweating is your barometer of fitness, you’re missing out.

You can do “cardio” anywhere you can go.  Unless you’re in Area 51 or Syria, you can go outside and explore.  There are trees to climb, paths to run on, and mountains to hike.  You can play Ultimate, soccer, softball, or walk a round of golf.  These are all activities that vary in their level of exertion, but all create a cardiovascular effect without you focusing on an a ticking clock or the latest updates from TMZ.  Come on now, Bieber doesn’t even lift.

Hell, you should go dance in the club all night rather than sitting in front of the silver screen.  If I have clients that are hell bent on doing more traditional cardio, I’d pick Zumba over a walk on the treadmill any day of the week.  Walking in a straight line is rarely fun, but dancing always is.  Moving is fun.

Fitness centers and “gyms” are judged on the volume of their equipment.  “How many machines do you have?” is a question asked far too often.  Instead, we should be asking about how much space there is to move.  Are there suspension trainers, sleds, and sandbags?  Does your training allow you to move safely in a variety of patterns?  If you’re only picking things up and putting them down, or moving in a straight line, then you’re a robot, not an animal.

Animals move however the hell they want.  They’re not limited by machines, ellipticals, or treadmills.  Sure they may sell wheels for a hamster, but when do you ever see a hamster sit on a wheel for 30 minutes at 65% of it’s age-predicted maximal heart rate?  Exactly.  On the other case, you’re much more likely to see the totally boss Gorilla being happy playing in a pile of leaves:

It’s fun to pick things up, move them around, swing side to side, and roll around.  You’re not designed to sit on a bike or push on a lever.  You’ve evolved to do complex tasks, both fast and slow, with a variety of objects.  At Prospect, our training reflects this.  Does yours?  If not, start thinking about how you can move more during your training.  Moving is fun.  Gorillas playing in leaves have a lot of fun.  Go be a gorilla.

One Reply to “How Often Do Animals Do “Cardio”?”