Glowing.  That’s the word I would use to describe the eyes on the Raccoon that visited campsite 94 in Hickory Run State Park on Saturday.  The park is in northeastern Pennsylvania, and I was staying in the campsite with my girlfriend on a weekend of rafting and biking.

I had just taken our t-bone steak, sweet potatoes, and corn on the cob off of the fire.  I was bringing them to her after preparing them on the finest paper plates in the world, and I heard my aluminum foil.  It sounded like it was dancing, crumpling itself into a ball, or running away.

All of the above.

I saw the two glowing eyes of a raccoon attempting to drag the steak drippings away.  Not so fast, buddy.  With some hooting, hollering, and a flashlight, I drove him away… for about 30 seconds.  Then he snuck closer.  More lights.  I made noises that I assumed would scare him.  Nothing.  Stupid human, he thought.  I have no fear.

I tried to take a picture of him yet was unable.  Instead, I recreated it in the tent: 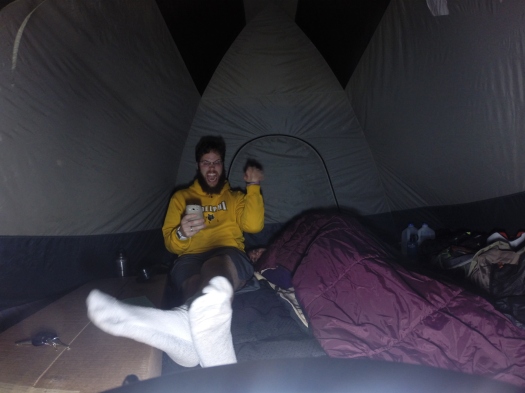 In a state park that includes running water, electricity, a store, and the dreaded downgrade from 4G service to 3G, we were by no means roughing it.  This Raccoon was.  Our worst weekend would have included a wet night in a cold tent.  Survival wasn’t an issue.  This Raccoon was surviving.

In the  20-30 minutes after our first encounter, I watched him slyly sneak around the perimeter of the campsite, in a military-style flanking maneuver.  Ever the defender of our food’s freedom, I took to small stones, flash lights, awkward dancing, and awkwarder noises to deter this rascal.  It made me respect his hustle.

A rather determined raccoon spent 30 minutes sneaking around waiting to steal food last night. I respect his hustle for the #protein #GAINZ!

After disposing of everything that seemed attractive to him, we were able to tuck in for the night, while he was off to raid or evade other camps.  If he consistently fails, on a long enough timeline, he dies.  I think this puts eating for hypertrophy into perspective.

You’re struggling to overeat.  This is a first world problem, but it’s a legitimate problem.  Anyone that has struggled with under eating for their goals has shared the feeling of too much food and too few calories at the same time.  The bloat is very real.

As this raccoon sneaked and peaked his way around our campsite, I thought to myself, “Damn, we need to think about food like this.”  Not in the long term, and not for everyone, but too often we ignore the issue of eating for hypertrophy.

We’re don’t want to become uncomfortable, so we put our plates down.  We’re not in the mood for another protein shake.  We don’t to eat that early, or that late, or that much at one time.  I guess we also don’t want to put on that much muscle.

Imagine what would happen to Casey the Raccoon, (named for case study, dzuh!) if he gave up after one attempt.

The rules of food choices may change for your hypertrophy goals; you’re looking for meals that are more portable, quick, perhaps calorically dense, or liquid calories for ease of consumption.  The most important factor is pretty simple:

If you’re not eating a caloric surplus, you’re not going to grow.  It’s that simple.  When your ability to eat is compromised, stop giving up.  Follow the lead of our glowing-eye Casey the Raccoon.  You must try, try, and try again to eat, and you must do so on a regular basis.  If small stones are whizzing passed your head as a deterrent, maybe that isn’t the best area for you though.

* I’ve already used the phrases “‘coon,” “hooting and hollering,” and “tuck in,” among other made-up words.  If you picked up on this Bush-ism, I applaud your Redneckery.