Over the weekend I visited Newark, Delaware to attend the Initiation of the Xi Mu Chapter of Phi Mu Alpha Sinfonia.  Our first event started at 9:30pm on Friday night, and I made sure to roll into town around 1pm.  Why?  The mountain bike trail system at White Clay Creek and Middle Run parks is awesome!

The weather wasn’t the most welcoming, but it was great to enjoy some time adventuring on two wheels.  Here’s my favorite picture I got from Friday: 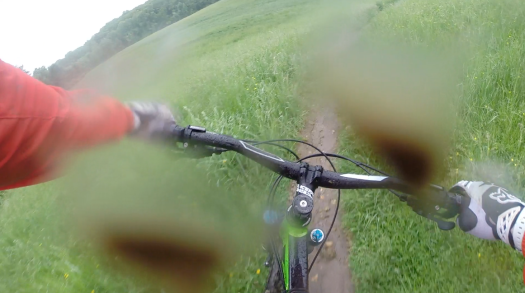 Over the course of the weekend, there was plenty of fun between Brothers young and old; from mentors to mentees and the newest brothers of the Alpha Pi chapter. Lunch on Saturday after our Initiation was at Deer Park Tavern to have some conversation, popcorn, and a Cobb salad with Brothers.  For dinner, we visited Iron Hill Brewery:

Salad-for-dinner plans foiled by the impending delight of @IronHillBrewery's Armed Forces Burger. Side salad it is. Bring on the BBQ sauce!

At dinner, our table of 15 probably ate 8 of those burgers, which featured pulled pork, bacon, and onion rings.  I joined the team, and had a great salad before the beef arrived.  Then we were off to Kildaire’s to celebrate the 26th birthday of our favorite lawyer, and stepped out onto the deck to enjoy some celebratory cigars. 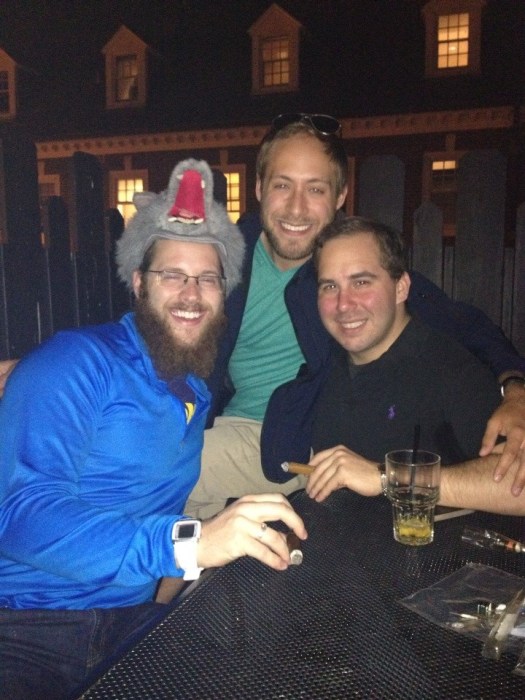 At some point in the half hour we were outside, my bearded Brother, Aaron, asked me,

Why are you doing this if it’s not healthy?

Aaron, are you kidding me? Okay, that’s not how I responded.  He was being facetious, but it got me thinking.  As a culture, we’re increasingly focused on learning about the healthiest things that we can do for our body.  There exists a giant gap between knowing what these activities are, and actually doing them.  That’s because we don’t consider being healthy and being happy the same thing.

Whenever I’m in Newark, I try to do two things; get a breakfast sandwich at Newark Deli and Bagel, and run hill sprints on the Newark Reservoir.  This weekend, I did neither.  They weren’t going to make me happy.

Instead, some salads, sweat, and cigars did the trick. I ate well.  I worked hard.  I spent time with my friends.  I enjoyed all of it.  In our culture of excess, we’ve come to recognize healthy actions as sacrifice:

“Oh, you’re having a salad for dinner?  How’s your diet?”
“Is that a green smoothie?  You must be doing a cleanse.”
“You run every day? Did your doctor tell you do?”

How many people do you know run marathons for their cardiac health?  Nobody.  They run marathons because somewhere along the way they’ve internalized that completing that task will bring them happiness.  How many people compete in powerlifting meets because they want to improve their bone mineral density?  No, they find joy in the toil of training and competing.  They feel that it will make them happy.

How many people do you know that sit down in front of a salad and think, “Okay this is going to be three and a half servings of vegetables today, time to count how much vitamin C I’m getting today!”

How many people do you know that choose their trails for hikes, runs, or rides based on what percentage of their heart rate they’ll be training at?

We’re obsessed with reaching benchmarks, tracking metrics, having infinitesimally small goals.  I’m sure that someone out there just set a personal record in fish oil consumption and is celebrating it, until he moves into the bathroom for three hours.  (I hope said person finds this on Google and realizes that he doesn’t quite get it yet.)

Let’s consider this model for the healthiest person that you know.  They’re doing it all.  12 hours of sleep per night.  Greens smoothies 3x per day.  They’re vegan.  They also eat grass-fed beef and grass-fed free-range Brussels sprouts.  They only take the world’s most purified fish oil, while eating salmon straight from the Grizzly’s mouth.

They meditate when they rise every morning.  They cycle to work, take yoga during their lunch break, strength train before spin class, then stand on their commute back because sitting is bad.  (I’m not sure how their bike gets home.)

They track their calories, macros, micros, heart rate variability, body fat percentage, defection schedule, and sleep in a cave in their yard because that’s the Paleo way to do things.

We all know this person.  This person is miserable.

When we differentiate between health and happiness, we destroy our ability to appreciate everything that we’re cable of.  This isn’t a declaration that chairs, cities, and cronuts are the devil and that we should all be running free in the hills eating grass.  I’m not about that.  Rather, it’s about some questions we must ask ourselves.

Are you looking at Healthy and Happy as two distinctly different things?  If an incessant focus on one is ruining the other, how can you bring them back together to best serve who you want to be?  “Are the habits that you have today on par with the dreams that you have tomorrow?” (Source)

The longer we separate happy and healthy, the longer it will take us to find both. For some, this means being more aware of how certain activities or actions make them feel.  For others, it’s about being less rigid in their awareness.  Being healthy and happy isn’t about sacrifice; it’s about balance.

When I rode again on Sunday morning, before leaving Delaware, I wasn’t aware of my body hating me or rebelling for smoking a cigar.  It wasn’t about that.  It was about celebrating with friends, and also celebrating on my own. Here’s a selfie that I took along the way: 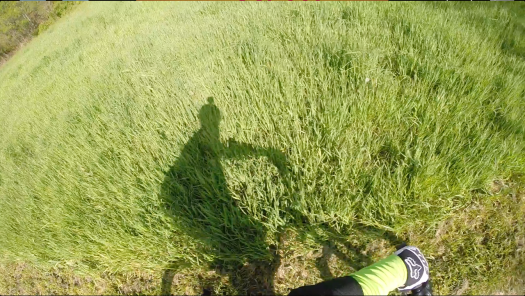 One Reply to “Healthy Versus Happy: They’re Really The Same Thing”