“I want you to do a constant tension, no pause squat at a 3.0.3 tempo.” I said this to a class of Ninjas at MFF during a recent Kick-Ass Conditioning class written by the gifted Liz Messina.  Liz writes amazing programs, but the Ninjas seemed bewildered.  We did our first set, and I coached them through the 3.0.3 tempo:  Three seconds in each direction with no pause in between.  At the end of the 30 second set, I asked them a question:

Click.  I watched the gears slide into place, and we approached the second set with a simplicity that was far calmer than the first.  In the past two weeks, I’ve turned that specific conversation into a coaching point in class.  We can either focus on the highly specific variables and spend a lot of mental energy in doing so, or we can simplify things in a way that gives us the same physical results, without the mental calisthenics.  Fitness doesn’t have to be confusing.

Look at that cat’s face, and remember that is how we all felt during our first day at the gym.  What does this thing do?  How the hell does it work?  Where is that weird whining sound coming from?

It’s coming from the lady who’s walking up the stairclimber backwards while doing the YMCA with 2lb dumbbells.  Or maybe the guy who insists on doing a 50 rep set of leg presses for the pump, bro.  These are myths and moments that make the gym intolerable for some of us, often times myself included. 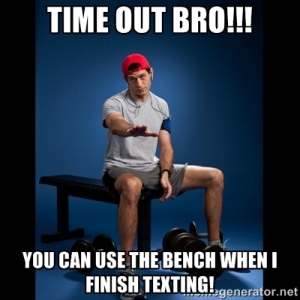 Discussing the nuances of the body part split versus whole body training, or the Whole 30 versus Paleo misses the point for the majority of people.  We’ve got beginners who can’t squat but are focused on Westside-style undulating periodization, while they’re eating McDonald’s and calling it the the Two Thirds 40. (That’s my satirical version of the Whole 30.)

We’re at information saturation.  We’re at information saturation, and the fitness industry is largely blind to it.  We continue to learn about the nuances of an asymmetrical pelvis, about joint integrity in end-range positions, and about carbohydrate timing for maximal performance.  We’re so excited to learn this, and we’re so excited to share this, that we end up teaching it to people who can’t touch their toes and are training for a 5k.  That’s not what we should focus on.

Often times I see that changing the focus is more of a challenge for new coaches than for anybody else.  When we’re young and eager in the fitness field, we have a passion for sharing, and an inclination to be the next hot-shot trainer, we can forget that most don’t care about the integrity of the ligament of Bigelow; most care about the integrity of their habits.  We focus on the minutia, and at best we confuse; at worst we discourage people from exercising at all.  As a field we need to clean things up.

Taking a “back to the basics” approach is my favorite way to declutter and demystify fitness.  It’s often as simple as stopping.  Yea, that’s right, stopping.  Before your educational crusade begins, stop to figure out where you’re starting.  This is highly dependent on the coach / client relationship, and ultimately comes down to one thing:

Find the next actionable step that you can do with confidence.

Should it not be done consistently or confidently, then it’s time to pause and reflect; how can we improve our integrity and do what we say we’re going to do?  That’s the piece of the puzzle that we’re constantly working on.  It’s a piece that evolves, that we search for, and when we find it, whittle away at to make it fit.  Of course, it’s only for the time being.

Let’s take a moment to stop and think:  What are you doing consistently & confidently?  Start there.  That’s it.  I just want you to think about what you’re currently nailing.  Live in that success.  Pat yourself on the back.  Celebrate!

It’s the things that we’re doing well that make fitness feel better.  It’s the things that we’re not doing well that make fitness confusing and complicated.  Let’s focus on what we’re doing well, so we can make the decision to do one of those slightly better.  It’s an approach that greatly simplifies that complicated fitness landscape that’s out there, and will make long-term success a reality rather than a dream.