When I first joined the team at Mark Fisher Fitness over two and a half years ago, I didn’t think I’d be writing an article on sports specific training.  At the time coaching competitive athletes seemed like a thing of the past, and very few of our Ninjas at MFF are competing in high stakes events.  Then I realized something:

If you have emotional stakes in the results, then you’re competing.

Those emotional stakes could be in setting a personal best in the gym, completing your first marathon, or enjoying the activities that you’re passionate about.  For me, that’s mountain biking, and I’ve been emotionally invested in becoming a better rider.  As the upcoming season nears, I’ve turned to the internet to learn more about how people train for the sport, and I was disappointed with what I found.

Replacing that disappointment with curiosity, I asked a local Facebook group about how they train, and someone shared a video with the comment, “Try this if you want to be a badass mountain biker.”  Their link was to the same article that led me to ask the question in the first place.  Talk about frustrating, amiright?

Here’s the video that ground my gears.  Check out a few sections, then we’ll continue:

In this video, we are gifted a glance at the training of Swiss cross-country rider Nino Schurter. Nino won the 2009, 2012, and 2013 World Championships and is the 2010, 2012, and 2013 UCI World Cup winner.  That means that he can dominate important races, ride well for entire seasons, and is currently one of the best riders in the world. 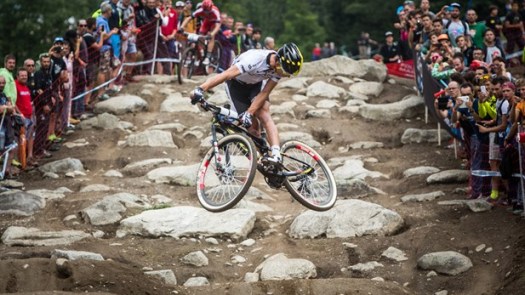 However, when I watch that training video, I see a number of exercises that seem so far from what I understand as best practices in strength and conditioning that I’d be remiss to ask the question:

Let me ask another question.  Suppose you approached me and asked, “Can you write me a training program to become a better mountain biker?”  I can tell you with confidence that it would include very few of the exercises shown in Nino’s video.  We would follow the tried-and-tried strategies of strength and conditioning: Move well, then move often.  We’d train movements like the squat, hinge, push, pull, crawl, and carry.

If you came to me and asked for  training program to become a basketball player, stand up paddle boarder, or jiu jitsu player, we’d follow the exact same approach.  Move well, then move often.  We’d become Brilliant at the Basics.

Unfortunately, becoming brilliant at the basics doesn’t sell very well.  It’s not very sexy to say, “Hey, go get really good at your sport, then train two or three times per week.”  Jillian Michaels is far more popular than Dan John, even though Dan’s seminal simplicity has impacted far more of us than the 30 Day Shred.  Simple isn’t sexy, but simple is what works. Considering simplicity, let’s a big question:

How often do you practice the activity you want to improve at?

Since my complaint about quality mountain bike training involves a comparison to Nino Schurter, I should do the upstanding thing and compare myself to Nino Schurter.  I used Strava for a side-by-side comparison and here’s what I found:

Guys, I think this is hilarious.  I actually laughed out loud when I saw the difference here.  I have a very stark look at the question, “How often do you practice the activity you want to improve at?”  That answer will almost always be Not enough.

Take a look at a video I took during my last trail ride.  This is on a section called “Sprain Slick Rock” at Sprain Ridge in Yonkers.

I’m not sure that any amount of bench pressing or squatting would have helped me keep a better line between those trees, or would have helped me with better body positioning getting onto that rock.  Rather, riding experience, on that segment or in general, will help me improve more.

Occam’s Razor is a heuristic that drives us to selecting the simpler explanation, given two options.  In the case of improving at any activity, is it more likely that we need to introduce unusual exercises to mimic a star athlete, or we need to practice the basics that makes them a star?

I’m confident that if we start our process by becoming brilliant at the basics, we’ll get far closer to our goals.  This holds true if you want to be better at jiu jitsu, paddle boarding, or any activity; you have to practice that activity in the first place.  For me, that means I get on my bike twice a week to explore the outdoors.  I improve my skills along the way, and have a blast doing so.

I don’t ride enough to warrant even attempting the exercises that Nino is doing.  They may work for him, but so does being a professional mountain biker.  Rather than focus on a professional’s routine, it would behoove us ALL to instead focus on our own, and give ourselves more time to practice the activity we want to improve upon in the first place.  That’s how you really become a bad ass.